Everyone knows that Amazon AWS (Web services) is one of the world’s largest cloud computing company. In 2016, they launched a sub-brand “Lightsail” VPS host, a bit like DigitalOcean, Vultr but enough easy to understand and deploy. And eventually, it started to grab business and people attention. Now what exactly is the Amazon Lightsail and how is it different from Amazon AWS main services.

What is Amazon Lightsail?

Actually, the Amazon Lightsail is itself a part of Amazon AWS cloud computing services, however, it is more like our standard Virtual private hosting services with fix amount storage and computing plan at a fixed cost per month.

It allows you to easily deploy different web servers or web applications like WordPress on the AWS cloud, with a few mouse clicks, and you can get started with Amazon Cloud.

Amazon Lightsail is the easiest way for developers, small businesses, students, and other users who need a simple virtual private server (VPS) solution at cheap rates to get started with AWS. Lightsail provides developers with computing, storage, and network capacity and capabilities to deploy and manage websites and web applications in the cloud.

It provides everything you need to get your project up and running quickly, including virtual machines, SSD-based storage, data transfer, DNS management, and static IP, which are inexpensive and predictable monthly.

If you talk about the handling of Amazon Lightsail virtual private service then it is the same as VPS provided by Godaddy and other nig names without any WHM/CPanel. To minimize the hassle of noobs, it offers a software gallery for the quick installation of popular apps along with OS platform.

Thus, Amazon Lightsail is a virtual private service that gives you templates to choose from. You may either choose a blank OS or an operating system pre-baked with applications and ready to use with the click of a button.

If you talk about the difference between Amazon Lightsail and Amazon Ec2 cloud computing, then EC2 stands for Elastic compute cloud which is basically another service by Amazon on its Virtual Cloud computing server. The Ec2 is the more inclined towards the enterprises that need a scale-up model and full control on each and everything. A user will charge on the basis of hourly usage rather a fixed monthly. This approach allows us to add the additional resources to our Ec2 created instance such as CPU power, RAM, Storage… It allows us to configure multiple virtual servers together, network management, security, resources, monitoring, ability to opt amid different Linux server distro images from standard to minimal and a lot more… So, in short in EC2 you are not limited to any particular predefine hosting or computing package.

Here are the options one get to setup Amazon Lightsail VPS

As you signup to Amazon Lightsail, you will get a screen with an option to Create Instance, just click on that to see further available options related to the setup of it…

This section means which data centre location of Amazon you want to choose to host you created instance or data. By default, it will choose the one which is nearer to your country or vicinity. 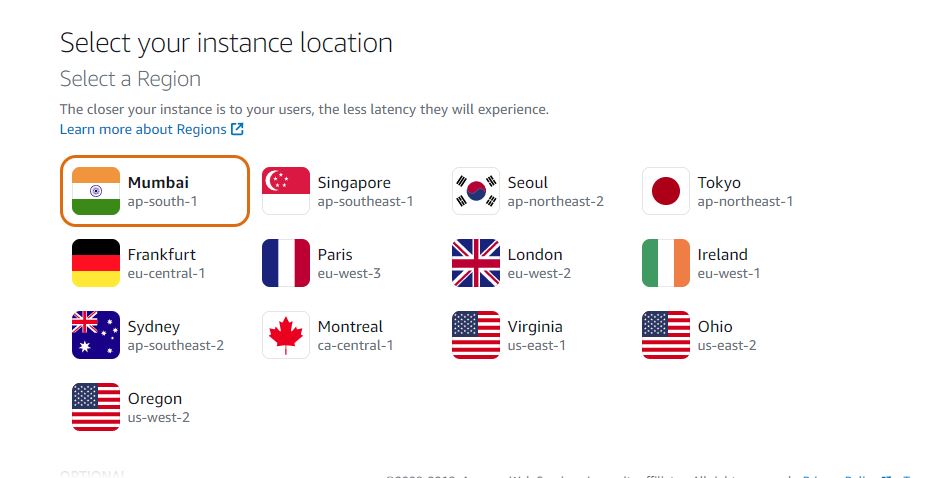 Second is the selection of Operating system for Lightsail

As we know server world is dominated by two sorts of operating platforms one is Linux/Unix and the other one is Microsoft Windows.

Thus, as per your requirement choose the one. However, if you want to install some popular app such as WordPress, LAMP stack then you must select Linux only; since under Windows you will get SQL, however, you can install whatever you want manually.

Under Microsoft Windows, the Windows server 2016 and Windows Server 2012 platforms are available to install on Lightsail. 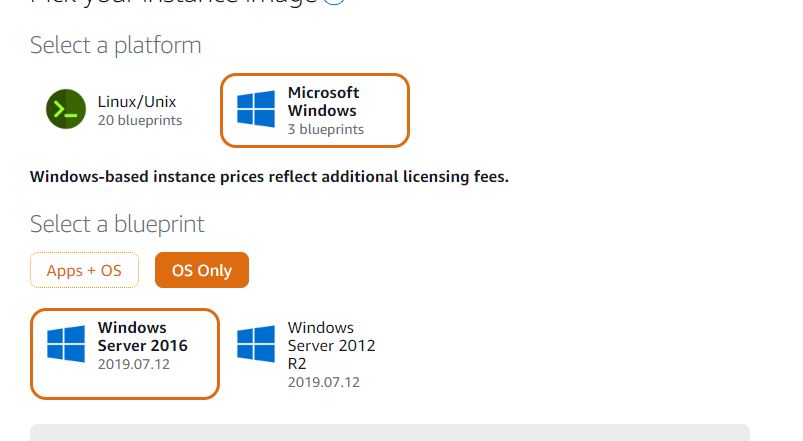 Note: When you choose OS only then you will get only a fresh operating system on which you can install whatever you want manually. 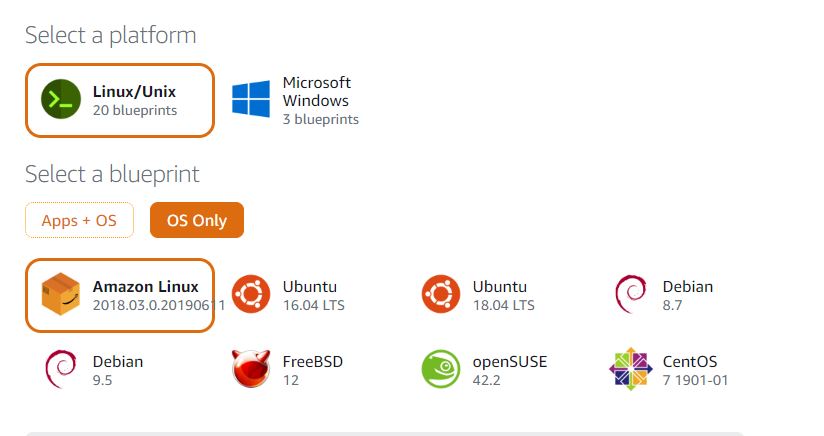 On the other hand, when we select APPS+OS option, then we get pre-baked apps along with Amazon Linux operating system that means no-hassle just one click and you are ready to go. While writing this article the applications available to install for Linux platform were WordPress, WordPress for Multisite, LAMP (PHP 7), Mode.js, Joomla, Magento, MEAN, Drupal, GitLab CE, Redmine, Mignx and Plesk Hosting stack on Ubuntu. 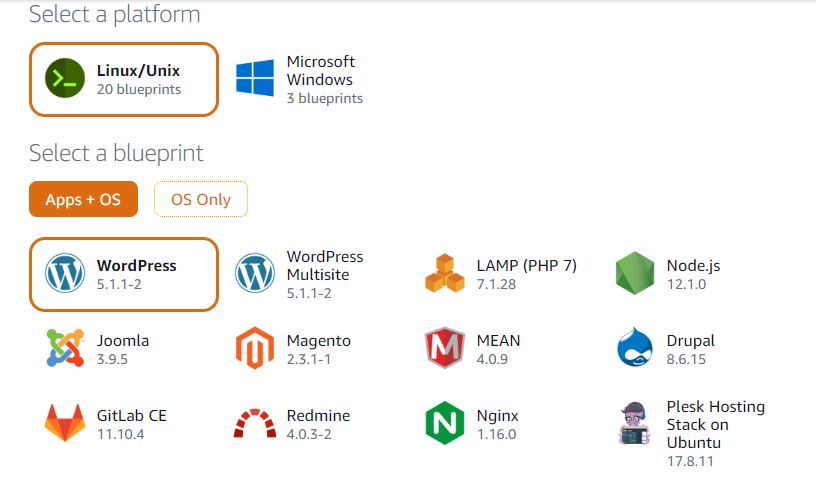 Next things are Add launch script, in case you want to run your instance with some special script. Along with an option to change the default pair of SSH key created by the Amazon.

The entry-level package costs $3.50 a month, which includes 512MB of memory, a single-core processor, a 20-GB solid-state drive (SSD), and 1TB of data per month, the same package with same cheap amount also available on Vultr Cloud VPS.

Starting of Amazon Lightsail was a logical step for Amazon to continue to expand its presence among developers. It’s easy to get started, but if you need to scale, you can enjoy all the AWS solutions and ecosystems that VPS providers can’t match.

Signing up for Amazon AWS requires a credit card, free trial of Lightsail for one month, and does not support Paypal. Free trial indeed the best thing to first get familiar with it before going live for some commercial purpose with LightSail.

1. Experience the power and reliability of AWS. Lightsail Virtual Private Servers (VPS) can be deployed in seconds and managed through an intuitive Lightsail management console or API.

2. Amazon Lightsail API extends the application or integrates it with an external application. Powerful API

4. The Lightsail server runs at high speed on the AWS network, allowing you to easily configure your network in a secure manner, including IP addresses, DNS, firewalls, and more.

5. Protect your data, clone servers, and more with Lightsail snapshots. Take and manage snapshots at a price of 0.05 USD/GB per month.

Once can join Amazon Lightsail free trial from here…

Note: We are not affiliated with Amazon web services from any kind and all the above information including link are for information purpose only…

How to enable multiple file downloads on Chrome browsers

How to install WordPress on Amazon Lightsail (AWS)

What is the Amazon Affiliate program (Amazon Associate) to earn money?

How to install Windows Server 2022 on VirtualBox

How to Download Windows Server 2022 Preview ISO or VHDX