Looking for some Open Source but best Linux distro to learn hacking and Pen Testing? Kali Linux distribution is always there…

Kali Linux is one of the best open-source operating systems for cybersecurity experts, penetration testers, ethical hackers, and in simple words, it is heaven for geeks out there. Kali Linux comes with a number of great tools for all the purposes that I’ve mentioned here, and it can also run on a virtual machine.

But depending upon a specific requirement that you might have, and facing troubles with using Kali Linux, whether, with the installation process of the same on a virtual machine or a dedicated system, or the overall functionality, it is the time that you should look for some alternatives. Just like everything else in the world of technology, Kali Linux also has its own alternatives.

There are a handful of great tools for cybersecurity, and the most basic to advanced ones come installed with most other cybersecurity-focused operating systems out there. However, if you are looking for something that isn’t available in Kali Linux, you can always download it. But if you want to try a different operating system out for cybersecurity, choosing the best one isn’t a piece of the pie. Thus, apart from Kali Linux Distro,  here are some other best Linux distro options for learning to hack and performing penetration testing… 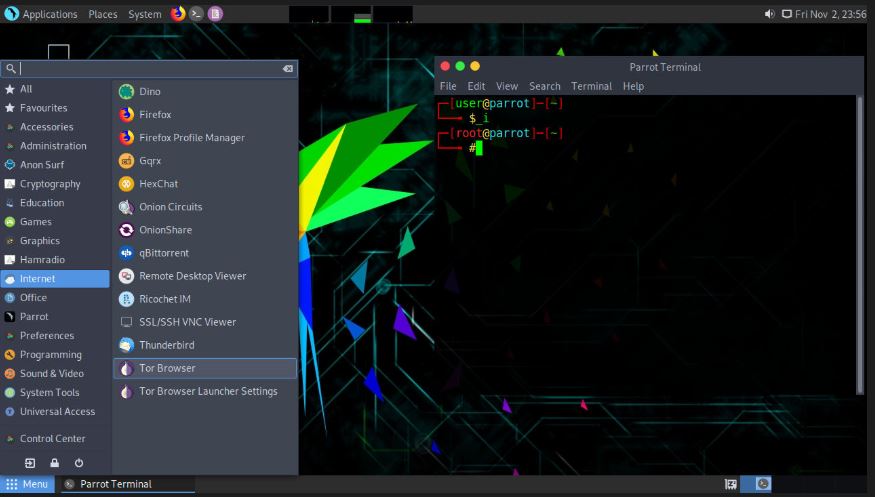 Parrot Security OS is very much user-friendly and is lightweight at the same time. The efficient operating system comes with a number of legally recognized programs and useful tools, which ensures complete anonymity while doing your work. Parrot Security OS is also highly customizable at the same time and you can change almost every single element of the operating system to suit your requirements. 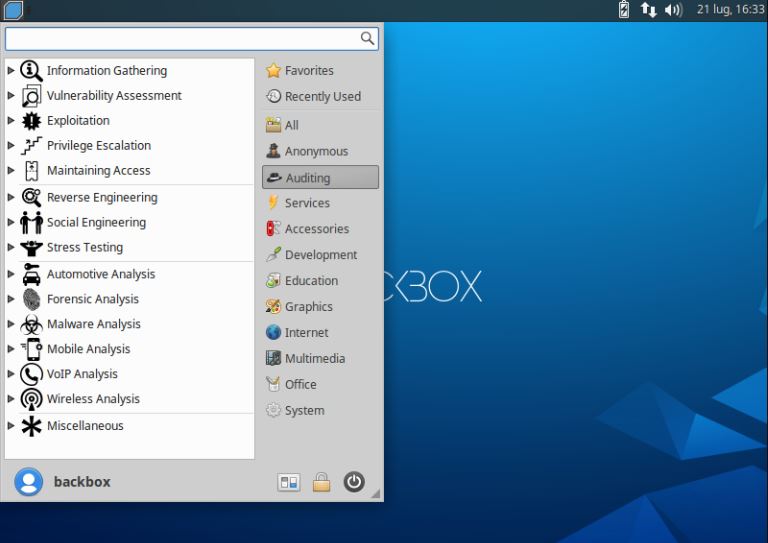 Just like Kali Linux, BackBox also has an enthusiastic team of developers and community members who are always willing to help you. If you are in Ubuntu fan and is going to have your giant leap into penetration testing and ethical hacking, BackBox will be your best mate.

The next distribution BlackArch is a comprehensive Linux distribution developed for ethical hackers, penetration testers and a similar group of users, and it is based on Arch Linux.

The distribution has over 1,400 tools for your requirements, and the user base is growing everyday for its easy to use interface, and a big team, who are always supporting the project. If you are comfortable with Arch Linux, BlackArch is the best alternative to Kali Linux that you can choose. 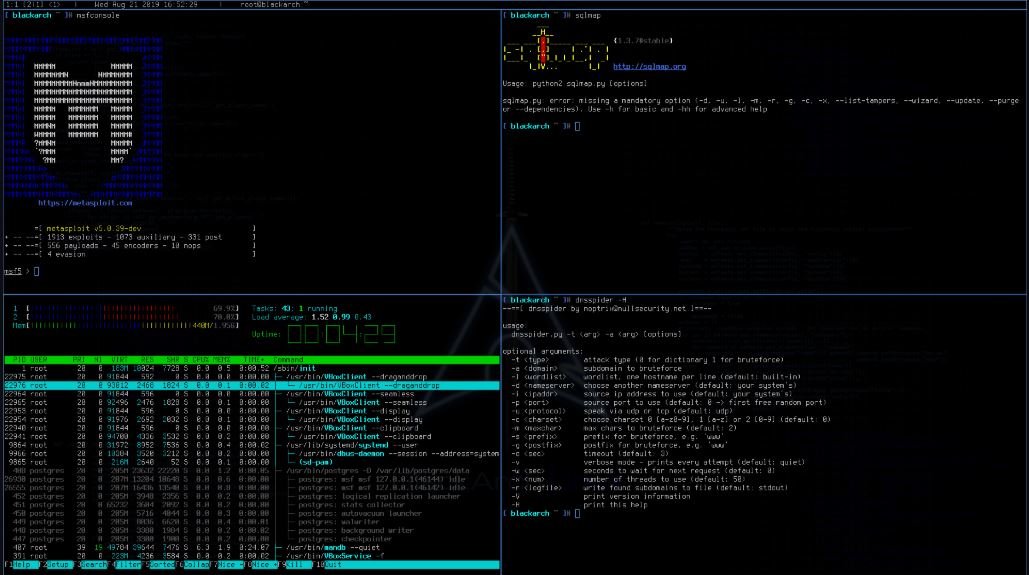 The packages on BlackArch can be updated using Pacman and BlackArch can also be run from the Live CD, to help you try it out before you finally install it on your computer.

The tools available with BlackArch gets updated regularly, making it one of the best Arch Linux based cyber-security distribution, if you want to use something other than Kali Linux. You can see the comprehensive guide to use BlackArch if you are using it for the very first time and is looking for how to get started.

Based on Gentoo Linux, Pentoo Linux distro for hacking and penetration testing comes with the light-weight XFCE desktop environment, which offers simplicity even with an abundance of different tools for security researchers, testing, and everything else, most users use Kali Linux for. Pentoo Linux comes with a lot of customization options, and you can even modify the kernel if you want to. 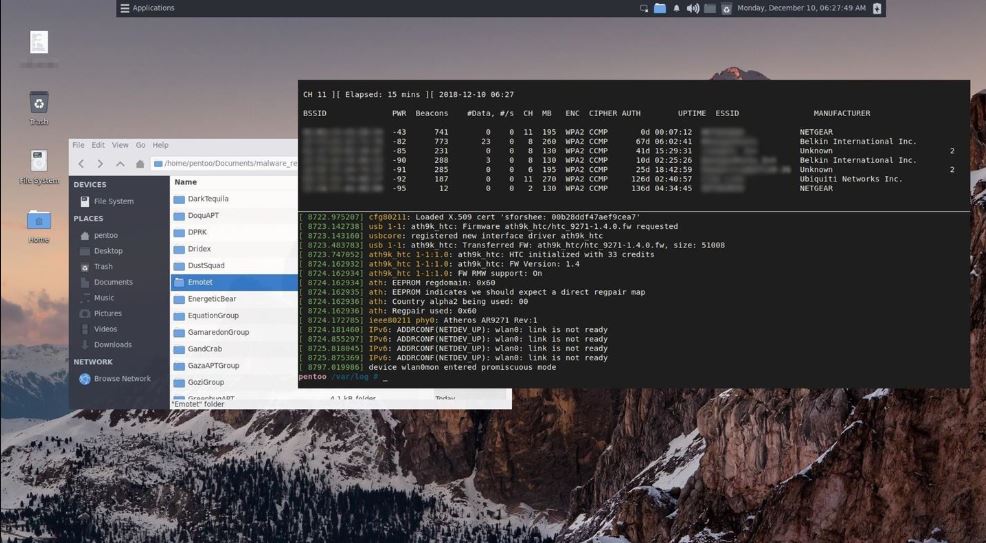 Pentoo Linux can also be configured to run on a Gentoo installation of Linux, which is cool. The Live CD of Pentoo Linux comes with persistence support, which means, changes made to the Live CD will also be available next time you boot your computer.

It means Pentoo Linux can be kept on a flash drive, and you can basically run it on any computer, and start working where you left off.

SemiCode OS is Linux Distribution Based on Ubuntu customized for programmers and web developers, Most of IDEs Text Editors, Compilers Come Installed By Default. Thus, it is mostly meant for programmers, however, being a Ubuntu Linux OS  based one can install all hacking and penetration testing tools available for popular Linux distro on it. 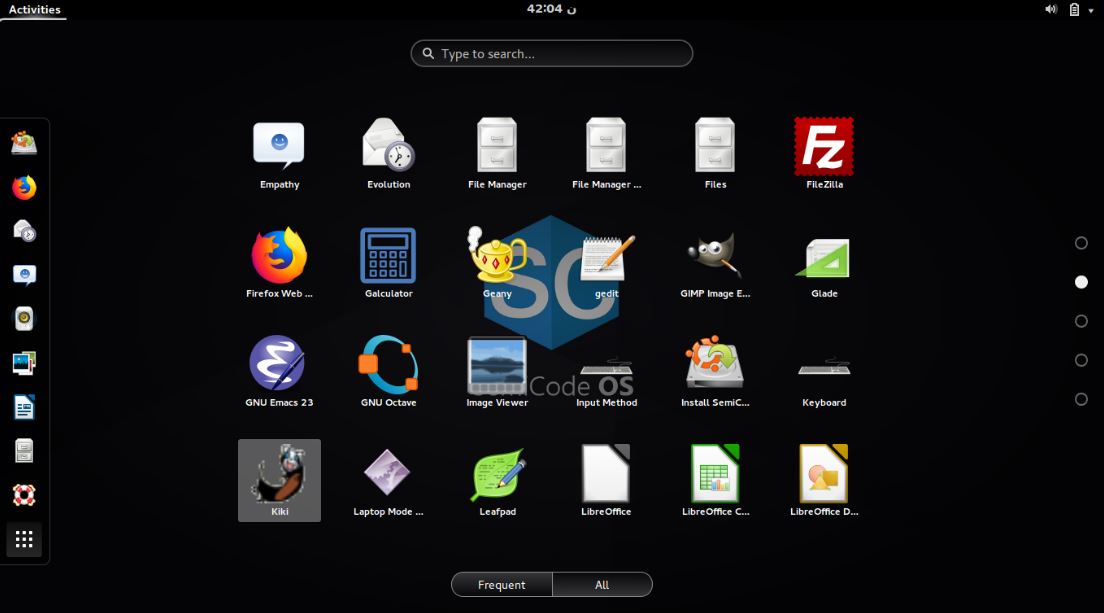 One of the best Linux distros for hacking is CAINE. It is computer forensics focused security operating system based on everybody’s favourite Ubuntu.

CAINE or Computer-Aided Investigative Environment comes with a number of useful tools for this purpose and can be used from a Live CD or by installing the same on a hard drive or SSD. CAINE will not disappoint you if your primary focus is computer forensics or anything of that sort. 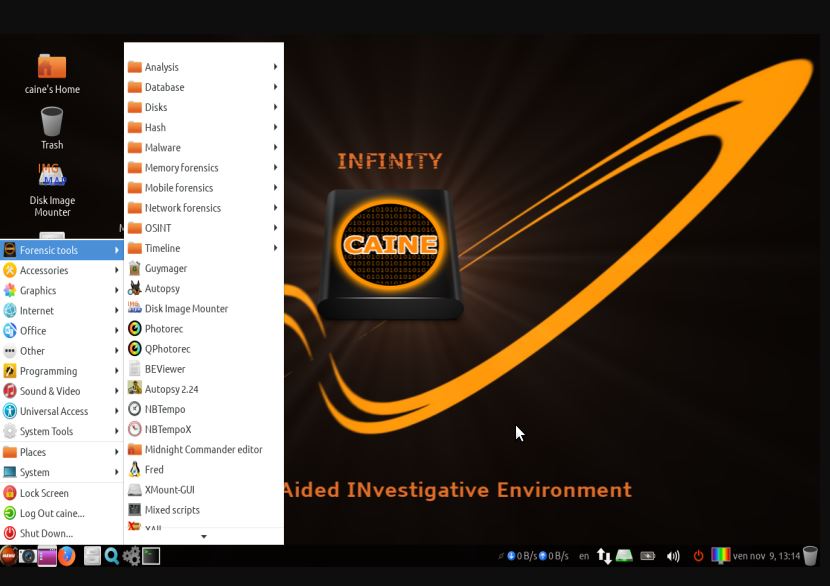 Tools for managing database, memory, network, and everything else is packed into the distribution so that you can get started with your work right after installing the distro. Besides the applications for expert tasks, the distro comes with basic utilities like a web browser, email client, document and image editor and everything else.

CAINE is backed by a vast community of security researchers and comes with the customized CAINE desktop environment which looks great, however, you can even switch to a new environment post-installation.

It is a Linux distro with advanced GNU/Linux Penetration Testing technology. Bugtraq is a user-friendly and community-driven Linux distribution for computer forensics, ethical hacking, and other complex cyber-security Linux Distro; which comes with all the basic cybersecurity tools, and the community also had its own set of programs, which you can find in handy. It is also available for Android as an app called Bugtroid Penetration Free.

The team behind Bugtraq is composed of an enthusiastic team of ethical hackers and cybersecurity experts, which means you can get the best out of the box with Bugtraq.

Bugtraq is available with a number of popular Linux desktop environments like GNOME, XFCE, KDE,  which makes it a full-fledged distribution, and you can download the best one that suits your needs.

Besides that, Bugtraq is available in more than 10 languages so that you don’t have to face any troubles when you start working with it. Availability in different flavours makes the distro friendly with different kinds of computers and hardware, no matter what hardware you are using.

DEFT Linux or Digital evidence & forensic Toolkit is a cyber security-based distribution of Linux with the main focus on data forensics. The operating system comes with a number of useful tools for Cyber forensics, and the speciality of DEFT Linux is the ability to run on a computer silently without tempering any evidence or make any changes to the system where it is running. Besides the primary focus on computer forensics, DEFT Linux can also be used by penetration testers and ethical hackers. 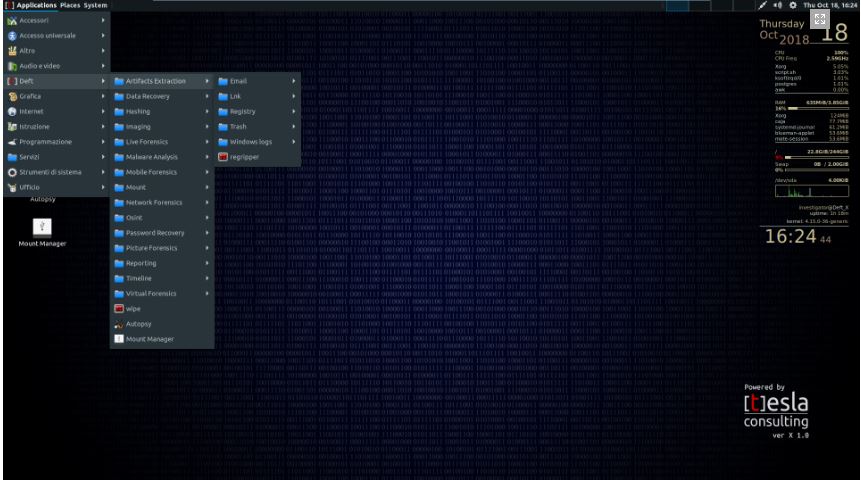 DEFT Linux is based on the light-weight XFCE desktop environment, and it is paired with DART, the acronym of Digital Advanced Response Toolkit, which is a forensic tool available for Windows. DEFT Linux also comes with WINE out of the box to install and run Windows programs without any problems. DEFT Linux comes with some unique functionalities for a large number of users, and thus, you should try it out.

Based on Ubuntu, Samurai Web Testing Framework is a platform built with forensic experts, ethical hacking on Linux, and penetration testers in mind.

Unlike most other Linux distributions focused for this domain of users, Samurai Web Testing Framework comes in a virtual machine, which is compatible with VirtualBox and VMware. So you don’t need to go through the process of installing it on your system. 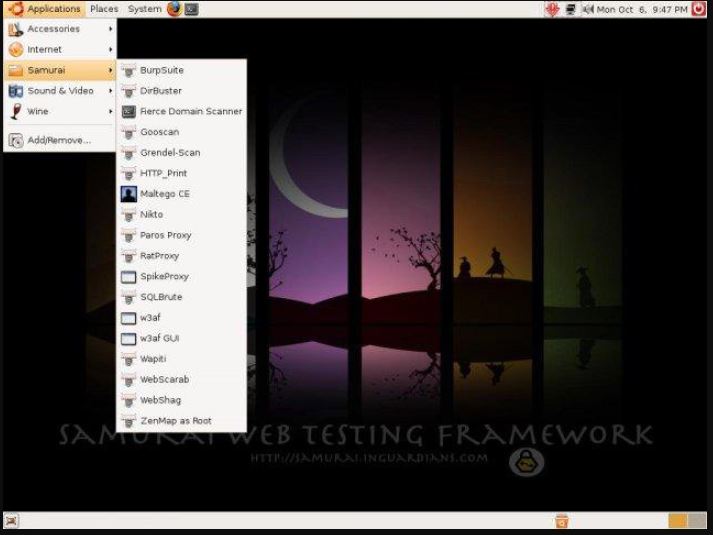 Samurai Web Testing Framework comes with a number of free and open-source tools for cybersecurity experts, and due to the flexibility of the operating system, most consider it to be the best one for ethical hackers and penetration testers.

The pre-configured Wiki Store Can be used to keep all the information associated with the penetration tests done by you for easy accessibility later on.

Another great cybersecurity-focused Linux distribution is Fedora Security Spin,  and from the name, it is self-explanatory that it is based on Fedora. It comes with a number of useful items on the plate for security auditing, penetration testing and also for system rescue purposes. 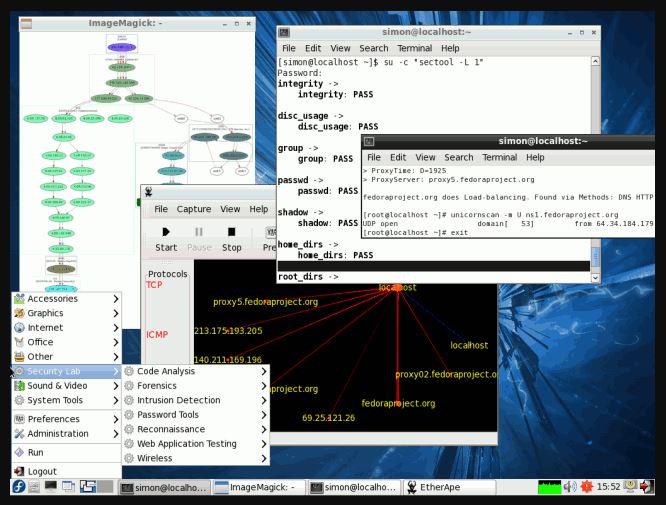 Fedora Security Spin comes with the XFCE desktop environment, and it is packed with some tools for network analysis, cracking passwords, intrusion prevention,  Firewall and everything else you will often need.

As it comes with XFCE Desktop Environment, it is quite lightweight, and you can install it can even on an old computer if you want to convert it into a test system for cybersecurity and allied tasks.

Another Linux distro for hacking that based on Ubuntu subsystem, Cyborg Hawk is a great Linux distribution for cybersecurity experts, and it comes with more than 750 penetration testing tools, besides a number of other tools for exploitation, stress test, forensics, mobile and wireless security, reverse engineering and everything else, that is associated with cybersecurity.  Besides the extensive set of tools available pre-installed, Cyborg Hawk also has its own custom repository to download additional tools. 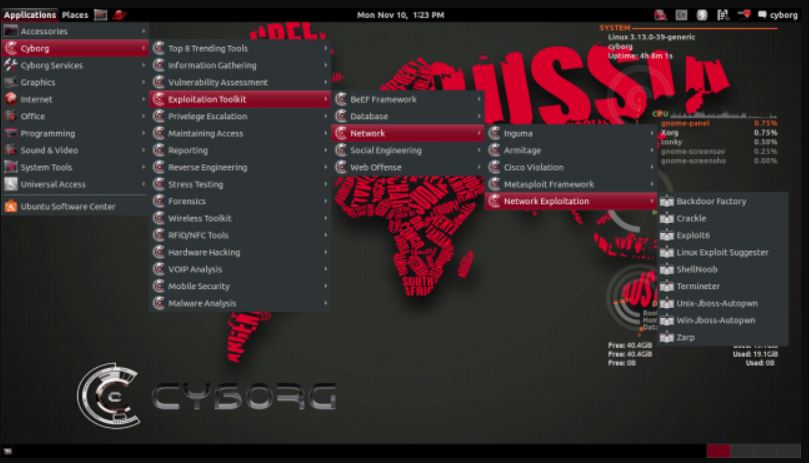 Cyborg Hawk might not be as good as Kali Linux in all aspects, but it comes with an organized user interface, well-sorted menus, and the kernel is secured from the latest forms of injection.

The different tools available with Cyborg Hawk is grouped into different categories so that you can find the most appropriate one without facing any problems. Just choose an item from the list of categories well grouped within the menu. Cyborg Hawk Is also Virtual Machine friendly, which is a big deal for most users.

When it comes to choosing a Linux distribution for hacking or programming, there are a number of points that you should keep in mind. The operating system should run smoothly on your system, and if you are installing one on your primary computer, you should always go for the one that you know how to use properly.

But using an operating system for more specific purposes like cybersecurity, which I have discussed here, isn’t that straightforward.

Kali Linux is one of the best cybersecurity operating systems, but there are many which offer more streamlined functionalities. I recommend you to try out at least a few of the most intriguing Kali Linux alternatives I have discussed here before you finally make your decision.
So that was my list of top 10 Kali Linux alternatives, that is worth your time. Do you have anything to add? Feel free to comment on the same down below.

1 thought on “11 Best Linux Distro for hacking and programming”