That’s the reason why Microsoft lately has introduced its official out of the box package manager for its Windows 10 operating system called Winget. If you are on Windows 10 1709 (16299) or later then you already have it, however, currently the numbers packages or software available in it are not as much as Chocolatey or other popular ones. Yet, it is new in the town, thus we have to give some time to it to grow.

Chocolatey works for both Windows 10 and 7, it released in 2011, thus it has been around for quite some time now. This makes it one of the largest online repository to download and install various open source and closed source software packages for Windows OS. It offers both community and enterprise solutions. The best thing, one can easily visit the official website of Chocolatey Windows Package Manager to search through hundreds of packages and the commands to install them. Of course, we can do that from the command line interface as well.

Furthermore, if would like to have a graphical user interface for Chocolatey to install, update, upgrade, and uninstall software, that is possible as well. Everything is nice, still, all the packages available on it are not well maintained, some are old others have multiple versions that generate confusion or conflict sometimes. 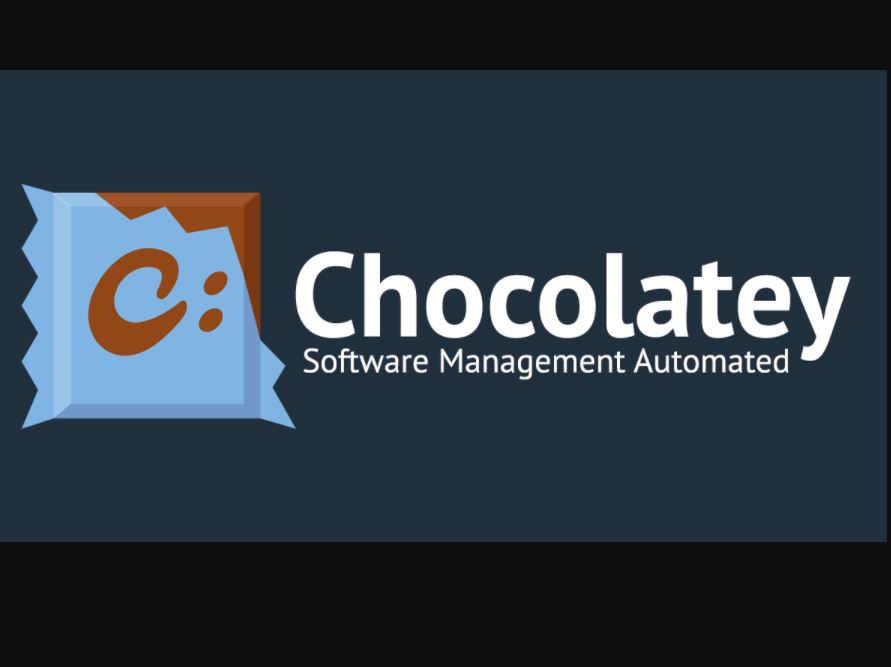 To install Chocolatey, run the Powershell with administrative privileges, and copy-paste the command given below:

Scoop is purely an open-source Windows Package manage to install software using a command terminal or Power Shell. It is popular among developers because of its self-contained process. All the package downloaded and install via Scoop will be stored in a single folder. Thus, the conflict is minimum and the installed packages are easy to uninstall.

Furthermore, we don’t need admin rights to use Scoop, I mean no evaluated Powershell or Command prompt to install packages as we do in Chocolatey. However, when it comes to the range of packages available in its repository it couldn’t compete with Choco, moreover, the gist of using Scoop is different. Most of the users use it to get mostly command-line tools such as MongoDB, MySQL, Python, Perl, etc. 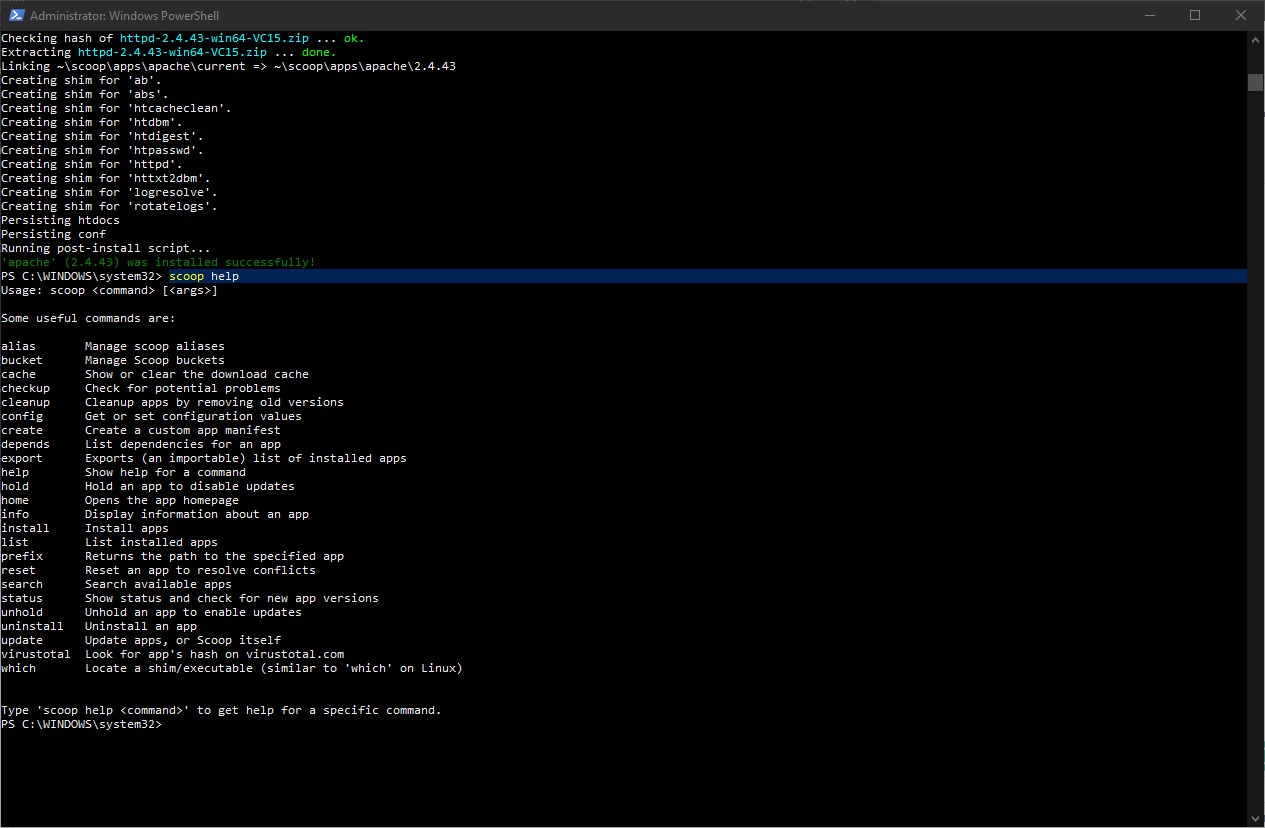 Here is the Github page of the project and tutorial to install it.

Another open-source command-line Windows Package Manager that has more than 1400 packages. It is not only simple and easy to use but also offers different ways to install a package such as silent, passive and interactive, it all depends upon the user how h/she wants to use it.  Just like chocolatey, it also has a website where one can easily search various packages to install. 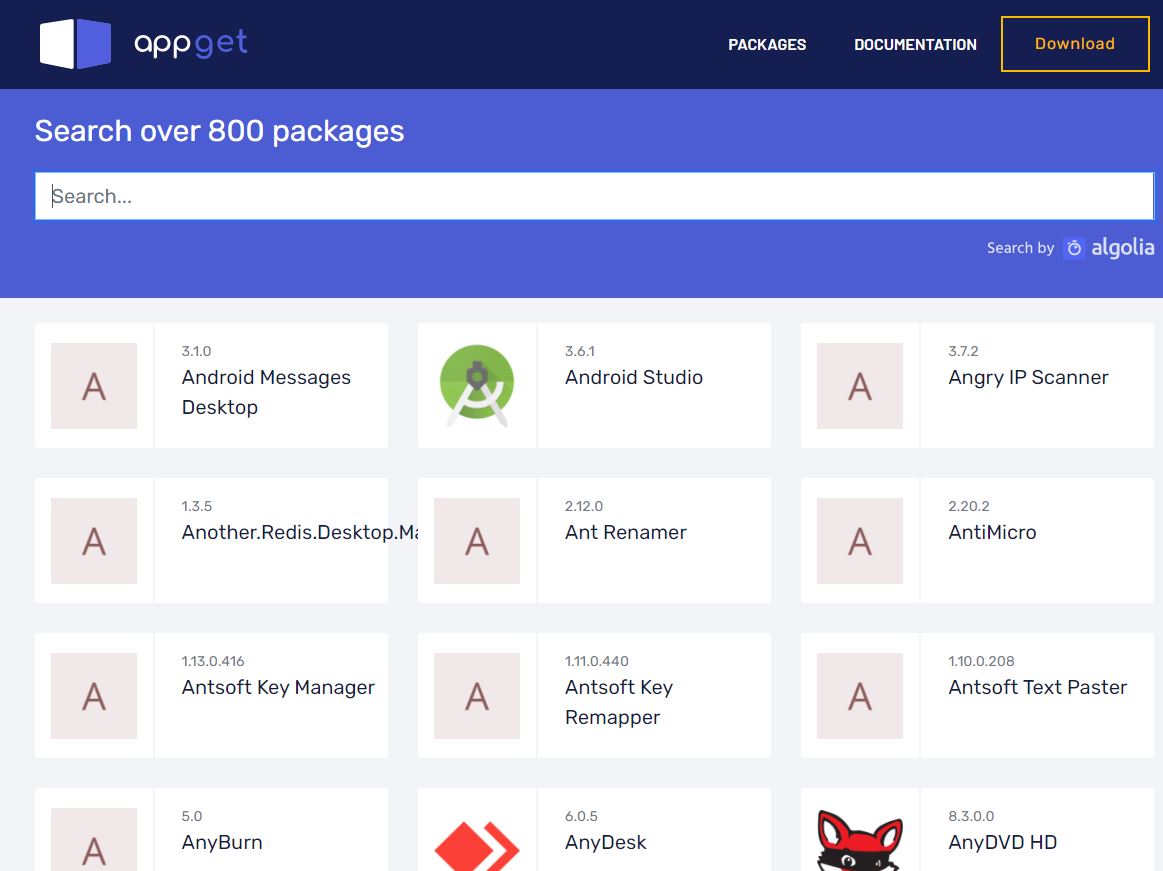 I know it is too early to consider Winget as the best opensource Windows package manager, however, as it is Microsoft’s own product, it eventually be. It has been around since 30 June 2020, thus still in the developing phase. As Linux operating systems such as Ubuntu started getting popularity among standard users and developers, one of the reasons is easy to install software processes using the Package Manager. Therefore, Microsoft perhaps looking for such features with a huge repository for Windows 10 as well. That’s why Winget real Windows inbuilt package manager for Windows 10 is here, completely independent of previous third-party solutions such as Chocolatey. 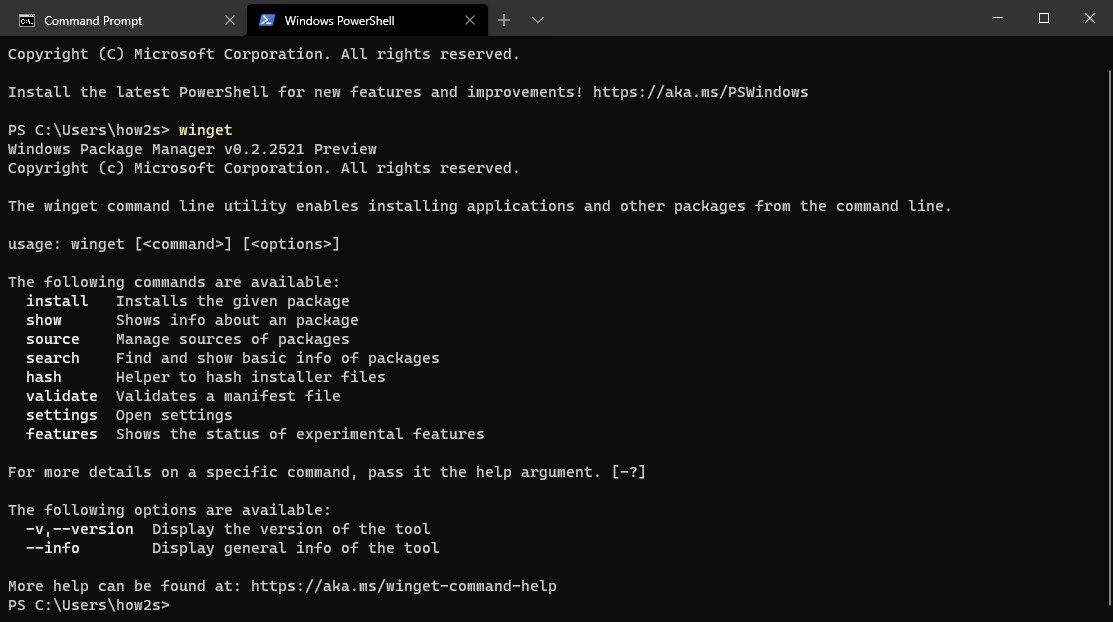 The best thing will be the users don’t have to install any third-party script or solution to enable Winget, it comes pre-install with Windows 10 1709 (16299) or later, therefore, if you on the latest version then you already have the Winget. Here is the tutorial to know how to use Winget on Windows 10.

Its previous job is to install msix and appx packages. Specifically, the app has been expanded to include a command for the command prompt that accepts all relevant arguments from a package manager.

Well, if you talk about the number of packages available on it then they are not yet enough only a handful of popular applications can be found. However, these do not come from Chocolatey and also not from the Microsoft Store. Interestingly, the source is a repository on GitHub. There, the community is supposed to maintain a list full of manifestos to which everyone can contribute. The actual program files are obtained from the official manufacturer’s servers.

Unlike others we have mentioned above, the Ninite is not a command-line based package installer, instead of a Graphical user interface. I know CLI is not a cup of tea to everyone, therefore, in that case, one can go for Ninite for installing popular Windows applications. It works on Windows 10, 8, 7…

The thing which pushed the Ninite to the downside is its limited category of software to install. It comes with pre-defined categories such as browser, Music Players, Documents, Runtime, Security, Developers, and more. Each category will have popular tools only. For example, the browser category features only three browsers- Google Chrome, Mozilla, and opera.

Hence, if you are a user who wants to install all popular software on Windows with just a few clicks but with GUI then Ninite is one of the best Package Manager to try. 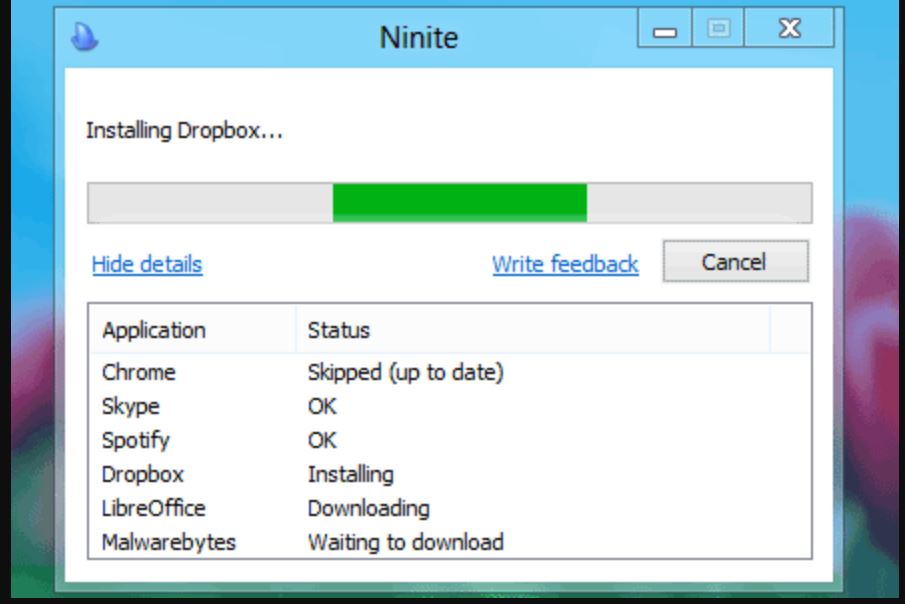 Ninite installs apps in their default location as per your PC’s language or one you choose. It can manage the updates for the installed programs as well… 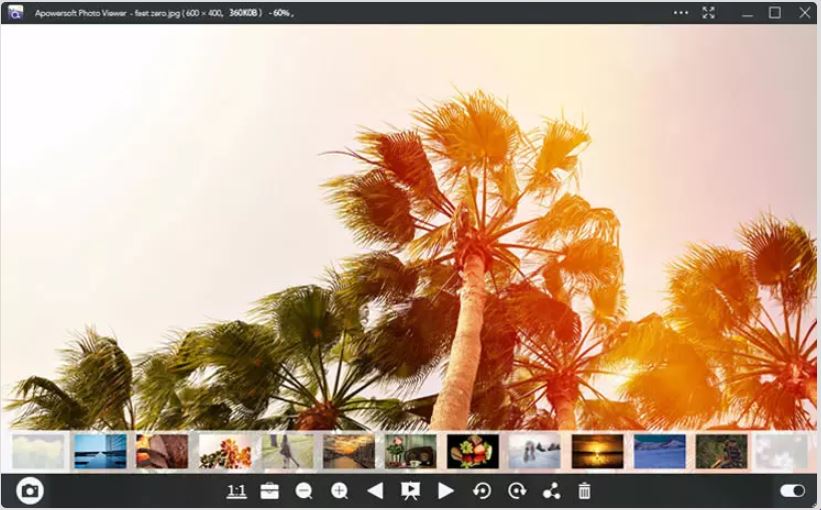 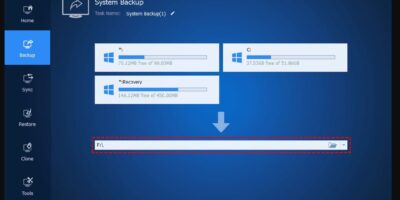 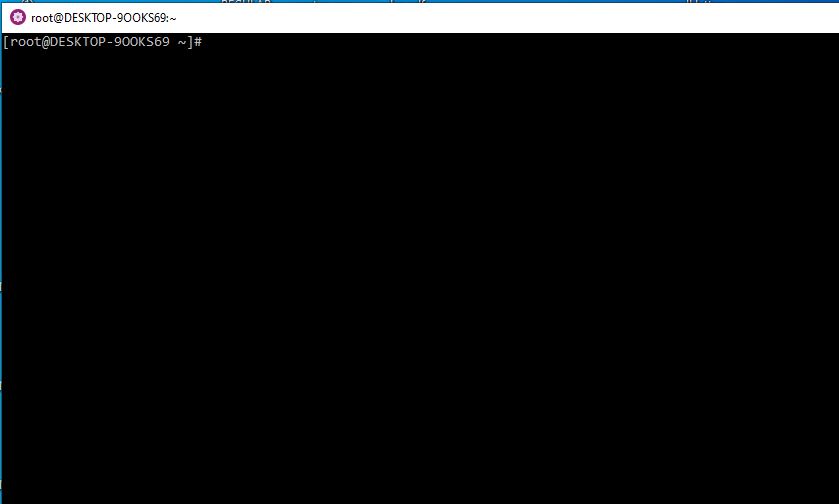 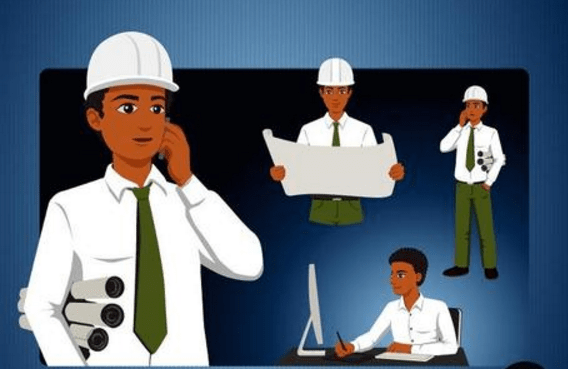