When it comes to choosing a Linux operating system for your Desktop PC or Laptop, you have a wide range of options. However, some popular ones are on the lips of every new Linux user they are Linux Mint, Debian, Ubuntu, and Manjaro. These all out of the box comes with different desktop environments, and here we discuss which one is suitable for home and what is the key difference between Linux Mint, Ubuntu, Debian, and Manjaro.

Linux Mint vs Ubuntu vs Manjaro vs Debian

Linux Mint is particularly recommended by most Linux users for Beginners. The first reason is its Cinnamon desktop environment that provides the traditional graphical element placement. Which makes it familiar to users especially migrating from Windows to Linux.

At the bottom of the display, you will have the taskbar holding the Start menu on the left side, which is used to start programs. Whereas, at the bottom right, Linux Mint shows the time and the system tray symbols.

Cinnamon desktop is very easy to customize with the help of themes and icons library provide by its community. Such as light and dark themes, if you don’t like green mint color set the one as per your taste. Using applets and desklets, Cinnamon can be expanded with functions and further customization.

For example, you can display Google calendar on the desktop (desklets) or determine exactly what is displayed in your taskbar (applets).

The Application launcher available via the start menu is divided into three sections, the first one on the left side will have three buttons to Lock, log off and restart Linux Mint. Whereas next two sections are to navigate through various software categories and the applications available corresponding to them.

By default, there will be some pinned applications at the top left in the start menu that is customizable and we can add or remove apps shortcuts from there. At the top of the start menu, you can also search for specific software. 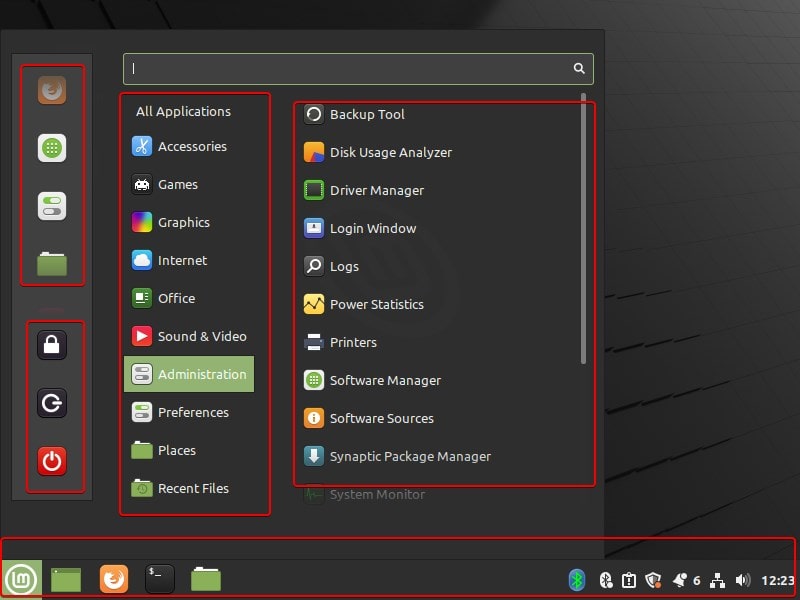 If you are moving from Windows then the start menu and apps arrangement will seem familiar. Here on Linux mint instead of Windows Explorer, you will have Nemo Filemanager and Terminal at the place of the command prompt to run various commands. Moreover, we can install manually PowerShell on Linux Mint as well.

When it comes to differentiating Linux Mint from Ubuntu, Debian, and Manjaro, the first thing is the Cinnamon Desktop interface. Whereas on Ubuntu and Debian the default is Gnome while Manajro is officially available with Xfce, Gnome, and KDE; however, you can install Cinnamon manually on Ubuntu, if you want.

The second thing it is based on Ubuntu, totally different from Manajro that is Arch-based. This is another reason for its popularity. Because of Ubuntu Repos packages’ availability and compatibility with other Debian packages, Linux Mint offers a wide range of choices for software.  Whereas, to make sure the availability of the Linux Mint even if Ubuntu would disappear in the future, developers also offer LMDE Debbie- Linux Mint based on Debian.

Also, although it is based on Ubuntu, out of the box, you will not find SNAP on it, because it has been disabled by the developers. Nevertheless, if you want then there is a way to enable and install Snap packages on Linux Mint too.

Apart from the Cinnamon, Mate and Xfce are other options available with Linux Mint to download, better suited for computers with less power. Yet, Linux mint is not limited to these three Desktop environments, we can install other desktop environments such as Budgie, Gnome, KDE, and more.

Whoever has searched for the best Linux distros list would definitely have found Ubuntu in it. One of the reasons for its popularity is the tons of tutorials and guides available online that let beginners and intermediate users easily handle it. Of course, the customized Gnome interface perhaps makes Windows users a bit uncomfortable.

It features a taskbar on the left edge of the screen with Dash (its Start menu) that allows users to access installed applications. Whereas the status bar is given at the top side to show time, network status and allows to access other options including system settings and buttons to log out or shut down the computer. To access files, Ubuntu uses a files manager called Nautilus. 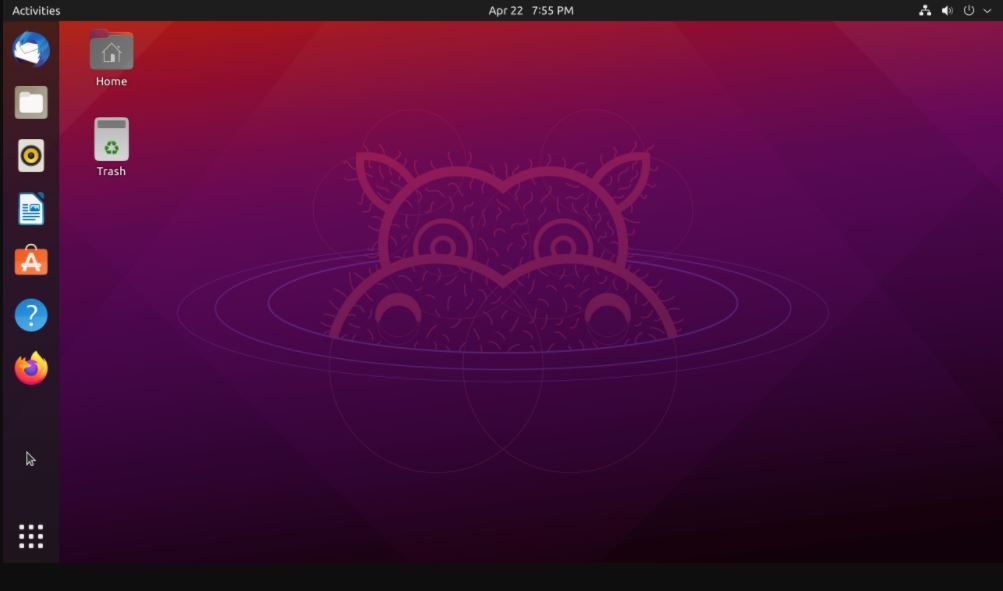 We can customize Ubuntu to a very high degree with the help of themes and Gnome-tweak tools. However, as compared to Linux Mint the customization options are not that much intuitive. In terms of packages, you will not find any difference between these two desktop Linux operating systems, after all, Mint itself is based on Ubuntu. Thus, the community tutorial and guides meant for Ubuntu are also applicable for Linux Mint as well.

The Ubuntu Software Center consumes a lot of resources during operation and is a bit sluggish to use. Mint’s software manager is leaner and more agile. Also, the software sourcing tool is also better in Mint. For example, it offers the possibility to reset the repositories (i.e. the specific program compilations for your distribution ) back to the standard in case you should have a mishap and damage or confuse the repositories. Furthermore,  compared to Ubuntu, Mint comes with a larger package of integrated applications, such as the GIMP image editing software.

In short, there is no significant difference between these two OS in terms of base, however, the Desktop interface and ease of usage give Mint the upper hand when it comes to Linux OS for beginners. Learn How to install Cinnamon Desktop on Ubuntu.

Ubuntu and its official derivatives – which version is right for me?

Ubuntu developers also offer their distro with different desktop environments and pre-install tools to target a specific set of users. The only difference in these official derivatives is the UI and default applications, the rest of everything is the same. Here are some of the derivatives officially offered by Canonical.

Learn: How to install the Kylin Desktop environment on Ubuntu 20.04.

Debian – Most Stable and Foundation of  other Linux

As we already have talked about Linux Mint, based on Ubuntu, but what is the source of Ubuntu. Yes, it is Debian. That’s is the reason why we can use the same Deb package on all these three operating systems. Thus, Debian is the upstream project to Ubuntu.

Debian is considered to be one of the most stable and well-proven Linux operating systems of all. The installed software is not always up-to-date, but it is proven, safe, and stable. There are around 50,000+ ready-made packages for Debian, i.e. pre-compiled programs that can be easily installed.

During the installation, you can choose a desktop environment for Debian such as Cinnamon, Mate, Xfce, KDE, Gnome, and others. Therefore, it offers a wide range of Desktop UI choices with stability. 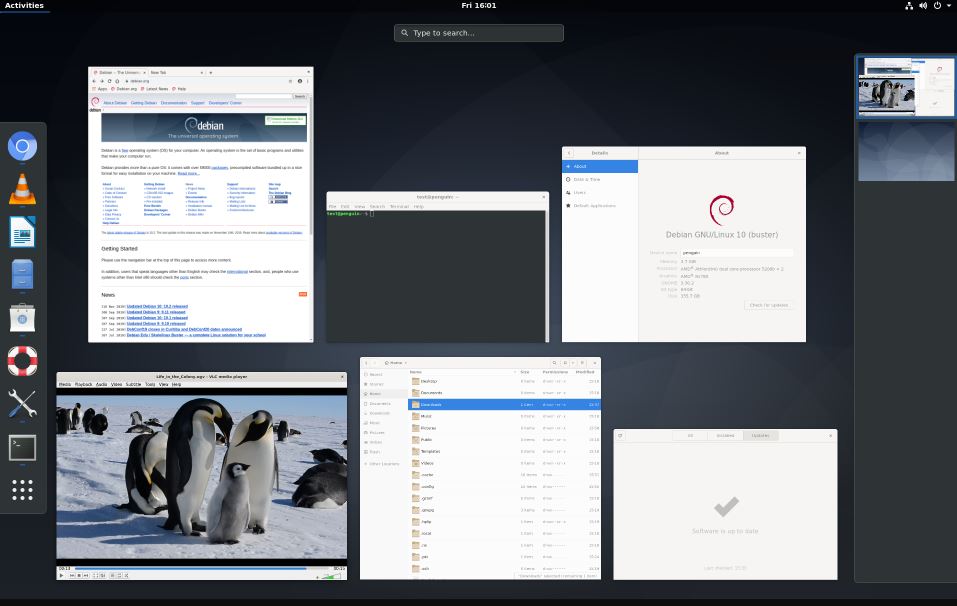 Well, as compared to Ubuntu and Linux Mint, Debian is not that beginner-friendly. Many times things that are easy to perform on Mint or Ubuntu, would be slightly difficult on Debian. Further, you will not get all the packages available via the rest of the two Linux default repos on Debian, the reason behind this is Debian strictly sticks to free software. Whereas Mint and Ubuntu that focus on usability include most of the things in their repository. Thus, there will not be any proprietary software in Debian’s default installation. However, the project ships separate repos that need to be enabled to get other than open-source software. Further, Ubuntu offers PPA but Debian doesn’t; PPAs are personal package archives that easily allow developers to let users install their software.

Among other things, the application management from Linux Mint/Ubuntu is missing, with which users can easily install new software. However, Debian is more popular for Server systems because of its stability, whereas the desktop users who want to use Debian but with more ease are usually opting Ubuntu.  Debian addresses more experienced and/or professional users, Ubuntu Desktop inclined more towards average to advanced PC users.

One more key difference is Debian is an absolutely independent community-driven project whereas Ubuntu is supported and funded by a corporate called “Canonical” just like RedHat.

Well, each Linux distribution comes with its own advantages and disadvantages that are not found in other distributions. Thus, in a nutshell: If you, as a normal end-user, are looking for a normal operating system for your desktop and want to decide between these Linux, then you should definitely choose Linux mint and then Ubuntu. If, on the other hand, you want to set up a system on which things like Office, Mail, and Browser run only and exclusively, you can definitely think about Debian. But the less you know about Linux, the more you should gravitate towards Ubuntu/Linux Mint.

Manjaro is really a versatile Linux operating system, if you are an advanced user then you would already be using some Arch-based operating system such as Manjaro. Yes, where all the three Linux systems above are similar and use Debian packages & APT package manager; Manjaro is based on Arch Linux and uses Pacman to manage packages. Hence, Manjaro is completely different from the rest of the three Linux distros given in this article and even different in terms of repositories that are ultimate and offers new software.

Where on one hand Mint, Debian, and Ubuntu users would be struggling to install some software, the Manajro user can simply install most of the applications with help of a few clicks from its Application manager.  The best thing, even if the binary is not available, the user can build a package from the source using its Graphical Application manager. Moreover, to given wide access to apps, the developers have included SNAP and FLATPAK directly into the Software manager apart from the popular AUR repository.

Even interface-wise, Manjaro is a big deal because it is available with most of the popular desktop environments.

Manjaro Xfce’s default file manager is Thunar, a task manager similar to Windows; it is possible to rename multiple files at once with bulk rename. Also, Steam,  Libre Office, Firefox, Thunderbird, and Process & CPU program Htop are pre-installed. And it always comes with the latest kernel packages.

Well, Manjaro is a rolling release distro, whereas the rest are long-term supported or with a new release every 2 years.

However, when it comes to community support Manjaro is still competing with Debian or its based Ubuntu/Linux Mint. The thing which I feel while using Manjaro is absolutely a great operating system with lightweight, good performance and beginners can easily install software that is better than Mint/Debian & Ubuntu. However, when it comes to usage and setting up of various services Ubuntu/Mint is still far better, For example- using the Samba server and accessing files from Windows is easier in Ubuntu or Mint than in Manjaro. In a similar way, there are few other things.

Hence, if you want a smooth, lightweight and always up-to-date Linux operating system with a wide range of packages and ease in their installation Manjaro is good to go. However, if you are completely beginner then Linux Mint especially those who want a Windows-like feel or Ubuntu for a different desktop UI experience. Whereas, the users who want an extremely stable and completely independent Linux distro for the long term to install some important server or critical day-to-day applications Debian is the one to ponder upon.