Perhaps the answer in your heart is wrong; might be the iPhone X is not that much expensive as it sounds… Because the Apple is not just a hardware company it also provides a complete software ecosystem and security too.

Since the launch of the iPhone X, it has been accompanied by user’s temptation to price. The starting price of  the iPhone X is $999  which makes it known as “the most expensive iPhone in history.” Indeed, compared to the iPhone 7, which was sold at a price of $649, the iPhone X appears to be too ungrounded. The difference of around $400 is enough to buy a good Android phone.

On the other hand, the iPhone X is an epoch-making work that honors the tenth anniversary of the iPhone and pays tribute to Jobs. With more advanced technology applications and rising supply chain costs, the price of iPhone X top model nearly $1400 can be understood to some extent. But if you take iPhone X compared to the same epoch-making initial iPhone, who is more expensive? Please rest assured that I certainly will not make a comparison from the point of view of pure economics, otherwise everyone will watch dormant.

In fact, ten years ago, when the iPhone was just released, it was also called sky-high price. When Jobs showed the world a full-touch iPhone with a combination of call, Internet, and music functions. Among others, Steve Ballmer, who is sometimes the Microsoft CEO, also said: “No one will buy such an expensive and no keyboard phone.” 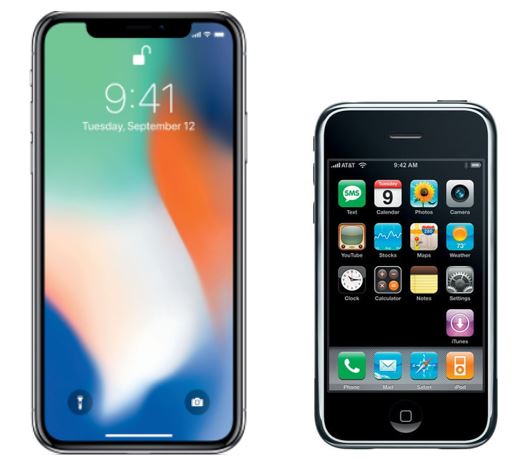 Round1, the original iPhone is more expensive.

When the initial iPhone was born, there were Saipan and Windows Mobile, followed by Android and Windows Phone. At that time, there were many brands in the mobile phone market. Consumers had a wide range of options. In addition to the most popular Nokia, Samsung, Blackberry, Motorola, Sony Ericsson, and more. As a newcomer to the mobile phone market, the price of up to $499 seems out of place. The last sentence of the then-CEO Ballmer ridicules the iPhone: “You can buy MotorolaQ for just 99 dollars. It is a reliable mobile phone that can do all the work that the iPhone can do.”

At that time, the original iPhone was not only expensive but also very impaired. Can you imagine that the iPhone was barely working before Steve Jobs started the conference? The original iPhone itself only supported the US carrier’s AT&T 2G network, does not support stereo Bluetooth, memory is only 128MB, can not multitask work… you will be willing to spend $ 499 to buy a phone with many shortcomings it? In other words, few people today would be willing to pay for the operator’s custom smartphone at the original price.

However, the latest iPhone X has the most advanced front camera module, a full screen that is imitated by many manufacturers, and an innovative dual-layer motherboard design. This is the highest density mobile phone technology in the world. With the exception of Apple, no vendor can provide such products. $ 999 can buy such a high-tech product, more value than buying a defective product for $ 499.

Round 2, the older iPhone is more expensive.

Round 3, iPhone X is more expensive.

After three rounds, the first generation iPhone won the first two games – the first generation iPhone was more expensive. Of course, we cannot analyze it solely from the perspective of pricing. The pricing of commodities is actually a complex and serious knowledge. It needs to be considered in conjunction with many factors. This comparison is just a discussion. iPhone X is expensive or cheap, and everyone has an established answer.

Yes, the iPhone X is expensive and nobody can deny that but wait; if you see from only the price perspective the initial iPhone looks cheaper but what about the features and technologies you are getting in the iPhone X those never be there in the first generation iPhone devices. If you compare them from that point of view the iPhone X is cheaper than the iPhone 10 years ago.  It can be seen who is the market leader and who has the initiative in pricing but still, iPhone X is costly and I understand the pain If somebody lost it… Also, don’t forget that the Apple is not just a hardware company, it also provides a complete software ecosystem and security.

Take a screenshot without pressing a single button on your iPhone: Here is how