As we all know that the VMware and VirtualBox are not the only Virtualization software to create Virtual Machines on Linux. There are few others such as Qemu & KVM. These are the most popular command-line tools to create virtual or delete virtual machines. So, being a command-line tool, it becomes very difficult for both professional and beginner users of Linux to handle them. Since the long command to create and run Virtual Machines on Linux or Ubuntu is hard to remember. To solve this problem there are a variety of Virtual Manager tools are available and one of them is the Virt Manager.

Now, What is the Virt Manager?

The Virt Manager is an open-source application that is meant to provide a Graphical user interface to Virtualization software like QEMU/KVM. It is particularly meant to manage the Kernel-based Virtual Machine (KVM) using libvirt bin. However, other projects such as Xen and LXC (Linux containers) can be managed too. It provides users with a summary of their running VMs including live performance and resource utilization stats of them.

If you haven’t installed the Qemu on your system, yet, then here is the tutorial on it: Qemu Ubuntu Tutorial

So, I assumed that you already have the Qemu or KVM on your Ubuntu system. And now looking for a way to install the Virt-Manager Virtual machine manager for Ubuntu.

Steps to install Virt Manager on Ubuntu via command line

To increase the performance of Qemu on Virt Manager it’s recommended to install the KVM too.

For that first of all check, whether your machine’s CPU supports the KVM or not.

1. The command to check the KVM compatibility:

2. If your machine CPU supports the KVM then run the given command to install it: 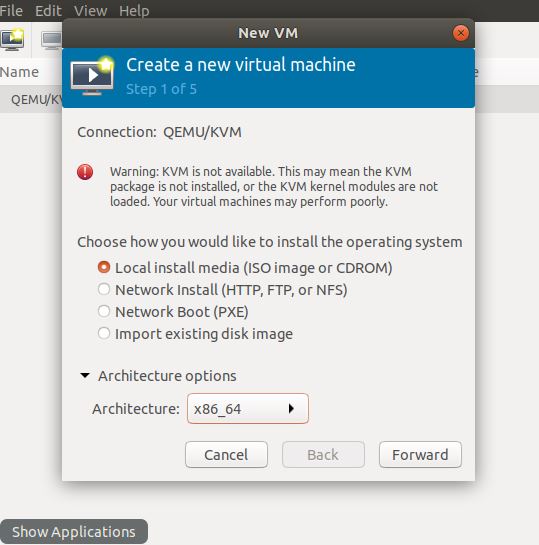 In case you want to remove the Virt Manager GUI tool from Ubuntu then execute the following command in a command terminal.

In this way, the user can install the Virt- Manager on Ubuntu.

Other resources to read:

Flaunt your charm this Wedding season with these grooming products