Out of hundreds of Linux distros here are some of the popular ones in November month of 2022. Some of them you might be familiar with and others would be new to experience in this list of popular Linux distros.

If you want to use a Linux operating system, you can choose from many different Linux distros tailored to target various user groups. For beginners, Windows switchers, or professionals, everything is there. However, here we are not targeting beginners or advanced users, instead, the explorers who want to try out the popular Linux other than the one they are already using.

Note: The 10 most interesting Linux distributions and their main features listed here are sourced and ranked with help of Distrowatch. However, the data there is only partially representative. Because Linux distributions, unlike Windows, do not collect user data by default, no one knows how many and which Linux distributions are used by how many people. The ranking is therefore based on how often a particular distribution has been downloaded.

Snal Linux is quite new compared to other popular Linux distros. However, it has been in trend because of its extremely lightweight and Arch base. Yes, it is an Arch-based Linux operating system that uses i3 windows manager. In terms of application, it offers a Firefox browser and other common utilities to manage networks and files.

Well, it is not meant to use like Fedora, Ubuntu, or Manjaro, but instead, as a Live Linux to solve the PC or network problems.

SparkyLinux is another lightweight distro in the list for fast performance. It can be easily installed on old systems to utilize their computing power. Its rolling release is based on Debian Linux but on a testing branch. So, you will get the new packages as compared to the Debian stable one. However, Sparky with a stable Debian branch is also available.

For GUI, SparkyLinux offers LXQt, Xfce, and KDE desktops. Whereas those who want to customize their Linux can go for MinimalGUI with the Openbox window manager ISO of this Linux. However, the Semi-rolling editions of SparkyLinux are also available with the MATE desktop. And MinimalCLI with no X server – for advanced users.

Apart from this, developers of this Linux also offer three special editions – GameOver, Multimedia, and Rescue to target a specific type of users.  The upgrading of the OS is also quite smooth.

EasyOS is not some old-comer in the Linux distro world and is an experimental distribution. It was launched in 2017 and since then it is still in active development. This one is also built on Debian Linux and used many technologies developed by Puppy Linux. This Linux was developed from scratch to support to container technology (Docker, LXC, etc are not used) and offers a custom one called Easy Container. That can run any app in a container, not only apps but also an entire desktop. While using EasyOS, everything happens in RAM to speed up things.

To ease the process of container management, the developers offer a Simple GUI, so that users don’t need to fiddle around the command line. Easy Containers are extremely efficient, with almost no overhead. The base size of each container would be of few Kbs. It uses JWM as a window manager and ROX for file-manager and desktop handler. 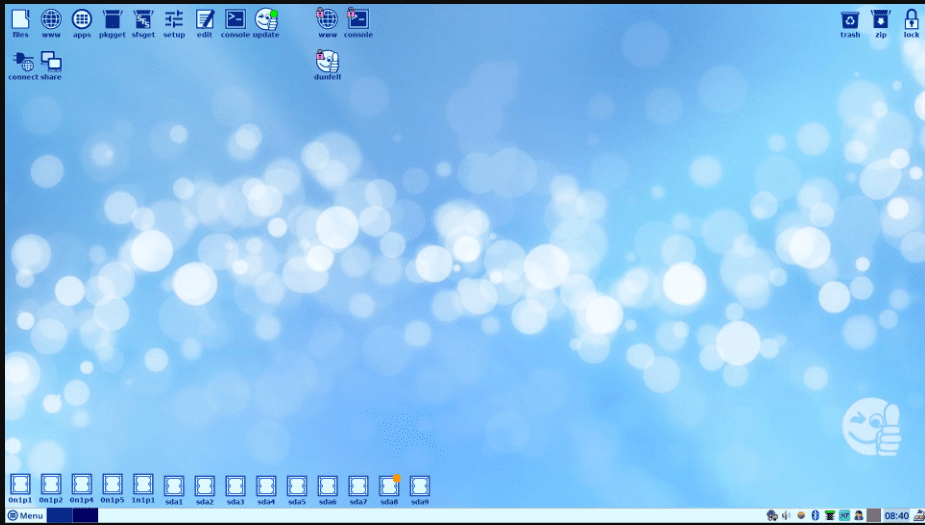 MX Linux is one of the most popular and widely used consumer Linux operating systems for Laptops and Desktops. It offers snappy performance better than Ubuntu; an easily manageable and stable Linux operating system based on trustworthy Debian Linux. This also makes it an optimal choice because you will not have only compatibility with thousands of Debian packages but also huge community support.

It is developed by the developer’s community of antiX and MX Linux. Available with XFCE, KDE, and Fluxbox desktop environments. All the needed software you will find in it, out of the box. And if the one that you want is not there, then use its fast Package Installer to get the application via MX Test Repo, Debian Backports, or Flatpaks.

Red Hat Linux is a popular enterprise-class Linux distribution that emphasizes reliability, performance, and scalability. Red Hat Enterprise Linux is considered one of the market leaders, so some software vendors offer certified software for it. The ten-year maintenance cycles are also business-friendly, eliminating frequent software migrations.

In addition to RHEL, Red Hat also offers other product ranges such as Jboss middleware, virtualization, cloud computing, mobile platform, storage, and cloud infrastructure management. In addition, lucrative support and services such as training and certifications for technical consultants.

Red Hat forms its own substructure. The RPM package is used as the package format. DNF is available as package management. RHEL is an enterprise distro with a clear focus on business customers with an interest in high-availability solutions and potent wallets.

Gnoppix Linux sounds similar to Knoppix, right? Yes, prior to version 22, it was based on Knoppix Linux distro, however, after that, it became Kali-based Linux rolling distribution with the latest Gnome desktop environment. It offers two editions- one we can install on a hard drive and the other to run directly from a USB or DVD drive. Even in running Live mode, this Linux can restore its previous session.

Gnoppix protects against surveillance and censorship and encrypts communications as well. It comes with some of its own developed applications and also provides better security, and all traffic is anonymized on this Linux (as per the developers).

EndeavourOS is a rolling Linux distribution based on Arch Linux. It is a successor to Antergos. Both distributions share the goal: A user-friendly Linux system, based on Arch. However, Endeavor does not want to be the Ubuntu among the Arch-based systems. Rather, it addresses users who are familiar with Linux but do not want to endure the tedious installation process of Arch.

Grml Live Linux is another in the list based on Debian with a collection of tools for system administrators. Due to its small size, users can use CD or USB to boot it in a Live environment to perform rescue operations by analyzing problems of PC or network devices. It offers both x86 and amd64 versions. The default interactive shell is Zsh. It also provides automatic detection of a wide range of hardware. Grml uses a high level of compression, it decompresses about 2Gb of software on the fly to use in a Live environment.

The first alternative to CentOS 7 or 8, based on RedHat enterprise is AlmaLinux and another popular Linux in 2022. Right after the RedHat announcement of ending the life of CentOS 8, the developers of CloudLinux announced the availability of one-to-one binary compatible Linux based on RHEL i.e “Almalinux”.  With an RPM-based Linux distro, the company has created a successor as a substructure for CloudLinux OS. While the latter costs money, AlmaLinux should remain free.

Being 100% compatible with RedHat packages, AlmaLinux OS contains, among other things, functions and improvements in the container tools to make the build and deployment processes more flexible.