If you have got a file from somewhere, and you need to use it for executing some tasks, it is a good idea to check the authenticity of the file. When it comes to checking the authenticity of a file, no other method is better than comparing the hash of the file you got, with the hash of the original file, or the one that has been sent to you by the sender. If you are using a computer, there are some great ways to calculate the hash of a file, using HashTab being the best one, but you can even check or calculate the hash of a file right on your Android smartphone.

Android phones do not come with a native feature to calculate the hash of files, but it can be accomplished with one of the millions of apps available for download on the Google Play Store. So if you have got a mail from somebody, or you have downloaded a file right onto your smartphone, you can calculate the hash right on your smartphone and check whether the file is authentic. Besides calculating the hash, you can even compare the same with the hash of the original file to ensure you aren’t duped with a duplicate file, or some bad guy changed the content on the route, chances of which though, is less.

Note: You can calculate the checksum of a file on Windows or checksum on Linux too.

So let’s get started with you can calculate the hash of a file effortlessly with a small minimalistic app on your smartphone.

Calculate the hash (checksum) of a file on Android

Step 1: Download and install Hash Checker on your Android device from the Google Play Store. 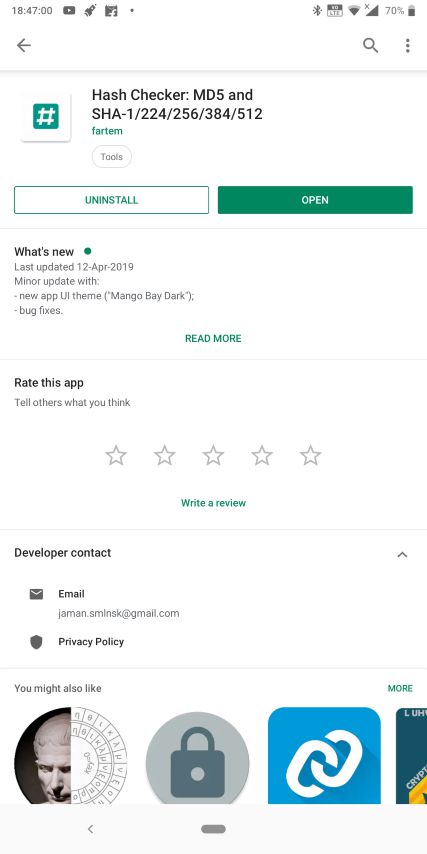 Step 2: After the download completes, open the app. The app is completely free from any kind of annoying advertisements, and it doesn’t have any in-app purchases. Just open the app, and you will get the minimal user interface to calculate or compare the hash of files.

Step 3: Just tap on ‘From’ to get started with the app, and then ‘File’ to calculate the hash of a file already there. 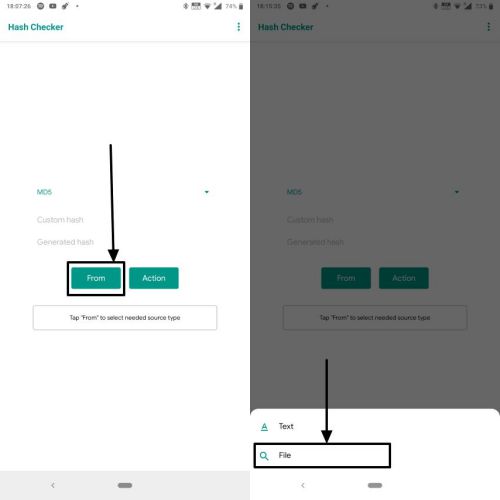 Step 4: Now choose a file from your local or cloud storage by tapping on it. The default file manager on your Android will open. You can switch to a different one if you want.

Step 5: Once the file is available in the Hash Checker app, tap on ‘Action’, and then on the ‘Generate’ button. 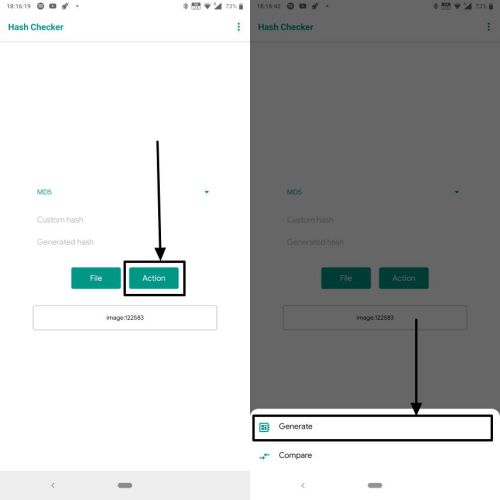 Step 6: The calculated MD5  checksum hash of the selected file will be in front of you along with the filename. 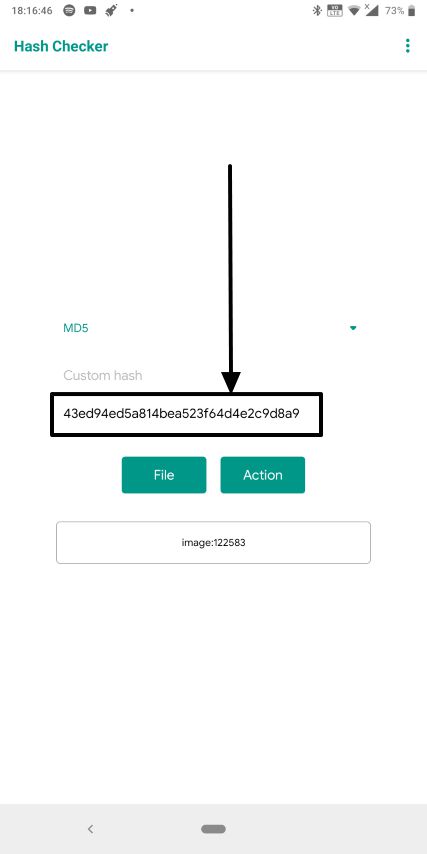 Step 7: Just tap on the drop-down icon corresponding to MD5 to choose any other hashing algorithm to calculate the hash with that algorithm. On Hash Checker, you can calculate the checksum of file using  SHA-1, SHA-224, SHA-256, SHA-384, SHA-512 and the MD5 hash. 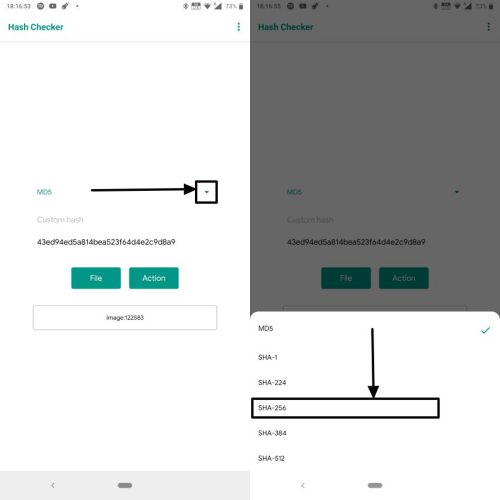 Step 8: On choosing SHA-256 or any other hashing algorithm, the calculated hash will again be in front of you. I have chosen to SHA-256 algorithm to calculate the hash now. 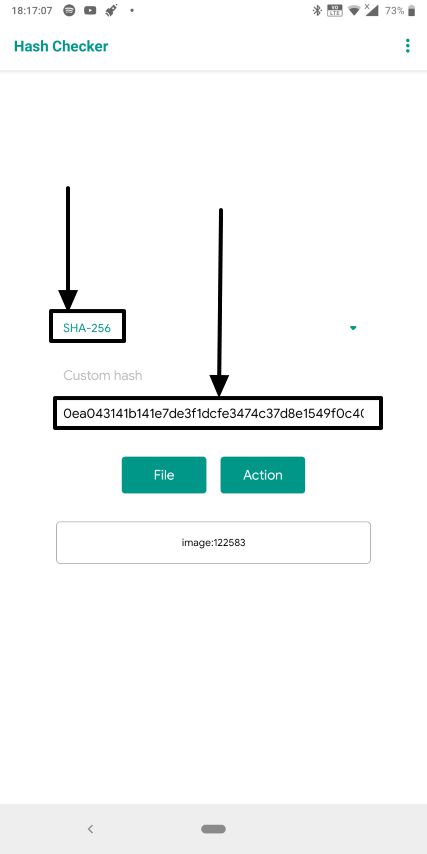 Step 9: If you have the hash of the original file, just enter it in the ‘Custom Hash’ box, right on the top of where the calculated hash is displayed. Then tap on ‘Action’, and then ‘Compare’.

Step 10: If the calculated hash match with the hash of the original file, ‘Match!’ Will be displayed. Just tap on ‘OK’ to start hash calculation all over again. 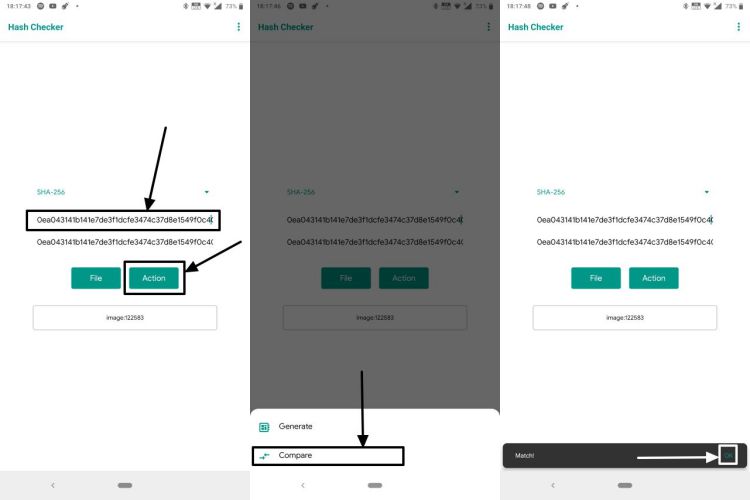 Step 11: Just in case, the hashes don’t match, ensure, the calculated hash, and the hash of the original file is calculated using the same algorithm. If still, it isn’t a match, there must be something wrong.

Step 12: So that was it. You can even calculate the hash of any entered text by tapping on ‘From’ or ‘File’, and then on ‘Text’. 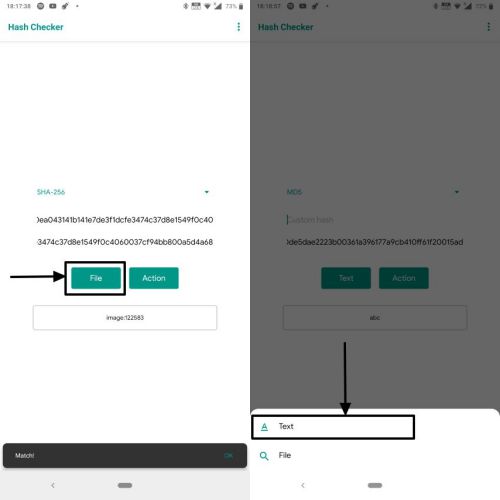 Step 13: Enter the text, and tap on ‘Action’ followed by ‘Generate’ to find the hash of the entered text. 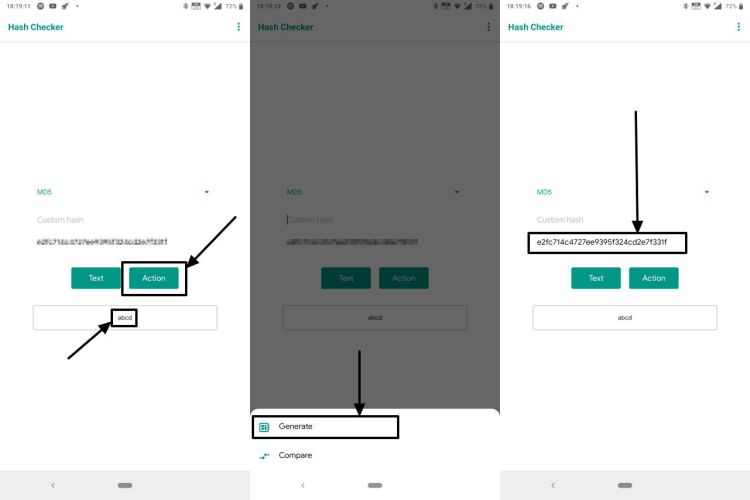 Checking the hash of an entered text can be very handy, if you want to check whether the content of any entered text, letter, or message has been changed, even the littlest, since the time you have created it, without the need of reading the complete text all over again.

On Hash Checker, you can calculate the hash of files using most major hashing algorithms out there.

Hash Checker takes around 4 MB space on your smartphone but does a great job of checking the authenticity of the files you come across, in the easiest possible way.

Hope the information was helpful for you. Do you have any questions regarding the app, or have anything to say? Feel free to comment the same down below.