To manage Docker containers on Windows 10/8/7, Linux (Ubuntu, CentOS, Redhat…), and macOS graphically use these top and best-in-class Docker GUI desktop and web management tools in the free or open-source category. Docker is basically a virtualized open-source environment that allows users to distribute and install multiple apps on the server without interfering with each other’s installation and process. Docker benefits most from cluster environments and data centers. It provides an isolated environment for the container.

You can compare the Docker Container with multiple containers available on a single shipyard with different articles. In the same way, Docker has implemented a technology called containers, which you can say is a term used alternatively instead of virtual machines. However, containers take up less space as compared to regular VMs.

What is Docker Desktop Dashboard?

It is an easy-to-install free application provided by the developers of Docker. We can install it on Mac, Linux, and Windows operating systems. However, larger enterprises with more than 250 employees need to purchase a paid subscription. The benefit of using Docker Desktop is, it offers a simple interface that let users manage containers, applications, and images on their local PC without touching the command line.

Earlier it was only available for Windows and macOS but now we can install and have the benefits of it even on Linux distros such as Ubuntu Linux. It includes Docker Engine, Docker CLI client, Docker Buildx, Docker Compose, Docker Content Trust, Kubernetes, and Credential Helper.

Thus, to mitigate all such incommodious Docker provides an API that can be used to manage it using GUI (graphical user interface) based desktop applications and web-based management tools.

Portainer community edition is the best Docker Desktop alternative. It is the open-source GUI for Docker which is extremely light in weight, just a few Kbs. The best thing, it is cross-platform and supports Windows 10/8/7, Linux, and macOS for installation.

The administration of individual Docker Engines is usually carried out using the Docker CLI when using the Community Edition. However, Portainer provides it with a free, intuitive, and easy-to-deploy Docker GUI that enables the management of containers, volumes, and more. After logging in to Portainer CE, the Dashboard will display a good overview of the Docker host.

In a single glance, hardware information such as the number of processors and the amount of RAM, as well as Docker-specific information (number of containers, images, volumes, and networks) can be seen. You can take a demo of Portainer before actually installing it on your own machine.

The demo account username is admin and password tryportainer, use and you will get full fledge Dashboard. From where you can create Docker containers and management of other services.

Note: In every 15 minutes the demo account will be reset.

In addition, it offers application templates, user management, and further possibilities, which are not available with Docker alone and offer a large added value. Some of its templates are WordPress, OpenFass, IronFucntions, CockroachDB, Microsoft OMS agent, and more.

User management of Portainer web GUI for docker, in particular, holds great potential if it were to be expanded to include comprehensive rights management in the future. Furthermore, it is also available on popular NAS box operating systems such as Synology and Asustor ADM.

Get Portainer or see  How to install Portainer Docker Web GUI

Rancher is another Docekr Desktop GUI alternative. It also a GUI open-source software and pretty much good for what it is meant for, which is managing different resources such as images and containers. Rancher is a complete software stack for teams adopting containers and can multiple Kubernetes clusters.

Rancher management server can be deployed on any Linux server or cluster for high availability, however, before using it makes sure the Docker is installed on the same server. Rancher is an open-source container management platform, it makes it easy to deploy and manage containers in any organization; once its access control is configured, the users can log in to it for creating environments.

The rancher environments are a cluster of servers running at cluster management framework and have specific access management control policies. The users can use different environments with it such as Kubernetes, Docker Swarm, and more. Once you created your environment Rancher allows adding hosts and other orchestrated stacks you want to use.

Within management, Rancher provides detailed management of all aspects of infrastructure and of course Docker as well such as host, containers, storage pools, and the container registry. In addition to container services, we can use it to look at the system services running Kubernetes or swarm. 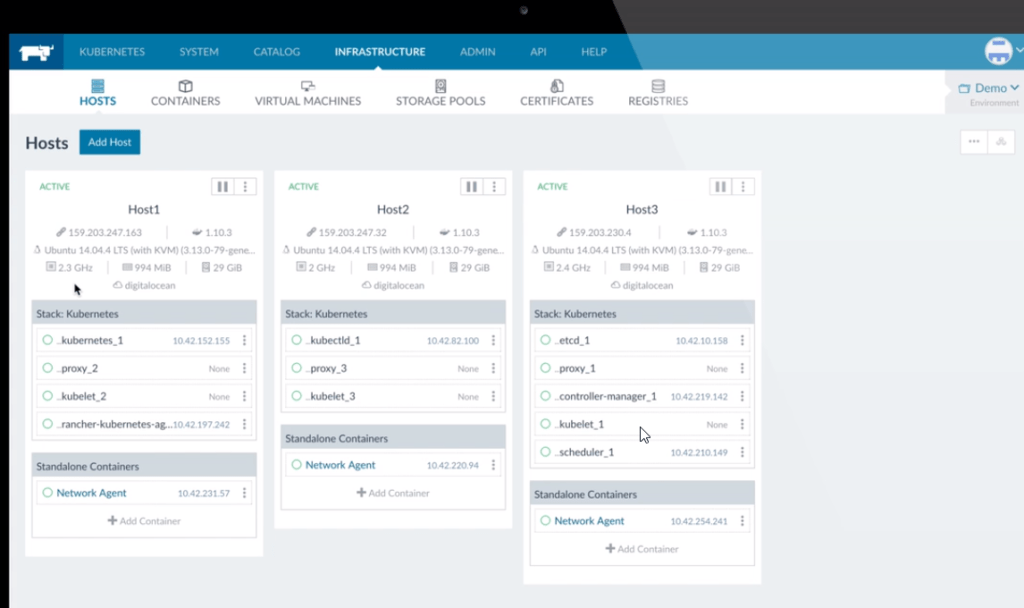 The real value of Rancher is its ability to provision and manage applications. Users or developers can push their application directly to it via CI and CD system, using Rancher’s CLI or API.