Learn the way to edit text and other files on Ubuntu as a root user using Nautilus GUI File Manager without the help of the Command Terminal. The tutorial is valid for all Ubuntu versions such as 22.04, 20.04, and 18.04…

Nautilus is the default file manager of the GNOME desktop environment including in Ubuntu. Nautilus Filemanager features include creating and managing files, previewing selected file types, and accessing remote shares. In addition, it has an interface for extensions, which allows for expanding the range of functions.

Apart from clicking on the File Manager icon, users can open it by typing nautilus in the command terminal. Also, by default, Nautilus does not display hidden files. With the keyboard shortcut Ctrl + H, hidden files can be displayed and hidden again.

The tutorial is not just limited to Ubuntu only. Any other Linux that is based on Ubuntu or Debian using Gnome/Nautilus as the default user interface can follow the commands given in this tutorial.

I can understand you might be wondering here we are talking about GUI File Manger then what is the need to use Command terminal. It is because we need to install a feature that is required by the Nautilus. Also, updating the system using the command line is an easy way. To open Terminal, the users either can use the keyboard shortcut that is Ctrl+Alt+T or search for the same using the application launcher.

It is good practice if you run the system update command before installing any software. Yes, we need to install an extension for our Nautilus File Manager to get a feature that let us edit files as root. Hence, let’s first update the system.

As with other file managers, right-clicking a file or folder opens a context-sensitive menu. The same goes for Nautilus with operations such as copying, moving, moving to the trash can, compressing, etc. offered but not the one to edit files as a Super Admin user. Therefore to integrate that, run the given command:

Once you have installed the Admin feature for your Nautilus File manager, reboot your system to properly integrate it.

Open your File Manager and navigate to a file that can only be edited using the rights of root users. After that right click on that file and in the Context Menu this time, you will see an additional optional “Edit as Administrator”.

As you click on the option, the system will ask for your sudo user password, provide that.

Here we are editing the system’s Sources.list file that is only accessible by the user with root rights. 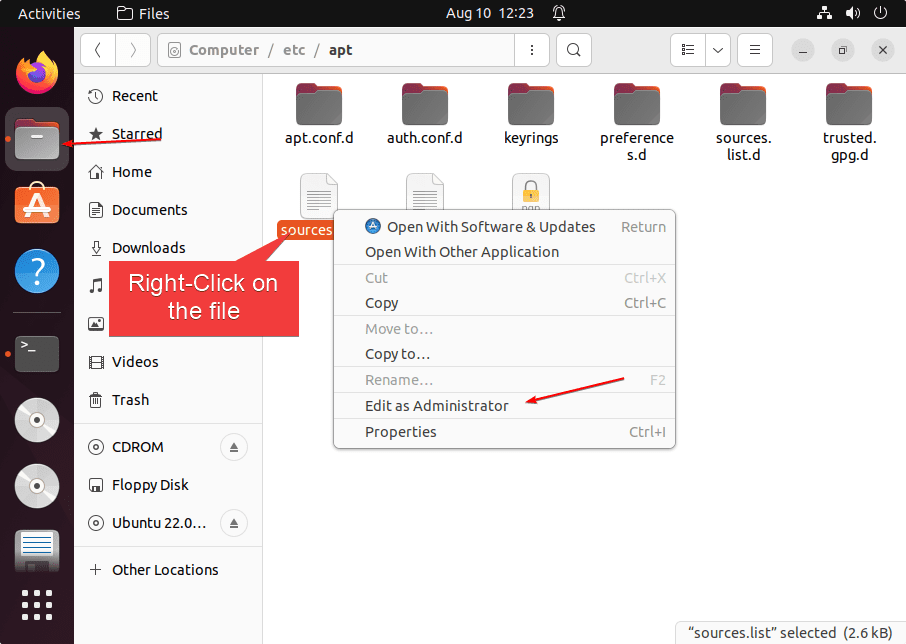 5. Remove Edit files as a root feature on Ubuntu

Well, in case you don’t want this Admin feature enabled on your Ubuntu, then we can remove the Admin extension from our Nautilus File manager using the command.