The developer of the Puppy Linux Barry Kauler in 2003 but later had abandoned it, however, fortunately, the puppy supporters took the job and keep maintaining it and now there are mainly three Puppy Linux products available. Though you can download many other Puppy Linux distro from the web and can try those but the community support as well as the repositories’ support for all of the distros are not guaranteed. Slacko Puppy is the version of Puppy Linux which is built on Slackware and utilizes the Slackware Repositories while the Puppy Tahr (6.0.5) is built on Ubuntu 14.04 Tahr Packages and XenialPup based on Ubuntu Xenial and both supports the Ubuntu repositories.

Now it is true that Linux based Operating systems are a complete world on its own. Most of the normal computer users around the world find it difficult to understand the details about different Linux distros and other distros under those. Do not worry, you are not the only one, there are lots of IT professionals around there who do not understand these details completely. Not all the Linux distros are as popular as some of them. In this article we are not going discuss the variations of Linux distros, instead of that we will be talking about the Puppy Linux Tahr 6.0.5, and other Linux distro similar to it. We will talk about the system requirements, productivity, effectiveness, pros, cons and all other aspects of the OS.

To make the bootable USB you can use any utility tool like UNetbootin, PowerISO, Win32Diskimager etc. But it is recommended that you use the utility tools which comes with the package itself.

After making the Bootable USB drive, you should also make a backup copy of your data in the pc. After that, you are ready to install your new OS. You can install the OS, followed by deleting the pre-installed OS partition, or you can also install the Puppy Linux into a new partition, hence you will be able to use dual boot system. Though it is easily possible for Windows only, on other hands dual boot system with Mac OS is a bit tricky.

You can use this Puppy Linux OS as your main OS as well as a backup OS. Dual pc is good to recover corrupted data as well to enhance the utility supporting using your same old pc. Dual boot is good for data recovery also.

For me it was really good, as most of the utility comes pre-installed, you can use the repository to download and install more utility apps, and we all know that installing apps in LINUX is much easier than doing it in the Windows. On the first bootup what I noticed shortly was, it runs smooth but runs super-fast. Of course, if you are a frequent window or Mac PC user, it is going to take you some time to get habituated with the mouse clicking and menu browsing, but the experience and productivity and all for free of cost do worth the effort.

Yes, this is how the desktop will look like. 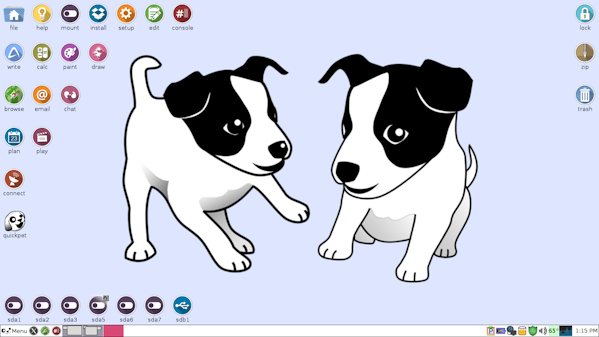 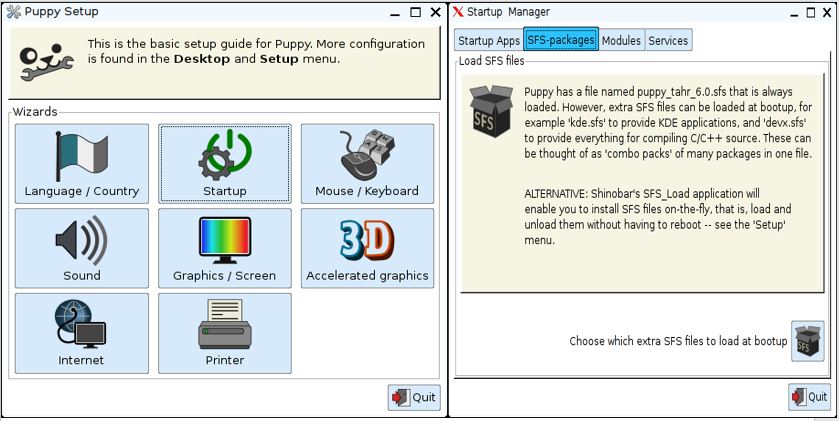 The Setup tool can be accessed by clicking on the Setup icon on the desktop.

From the newly opened window, the user can change the language settings, keyboard layout, Keyboard language, time-zone, etc. Choosing startup options, configuring mouse and keyboard, adjusting audio settings, changing screen resolution, setting up 3D graphics and setting up a printer, scanner or a webcam all can be done from this Puppy Setup tool.

Whenever you boot up Puppy OS, by default, it loads default save file. Though the user can add more save files which can be used as the primary loadable save file at the time of booting. Extra kernel modules and drivers are also save-able within the save files to be loaded while booting.

If you want to have other pre-optimized save file then you can break the internet in search of that. After downloading Save (SFS) file just place it simply in “/mnt/home” and normally click the button in the SFS-Packages’ tab and the packages within it will be loaded automatically. 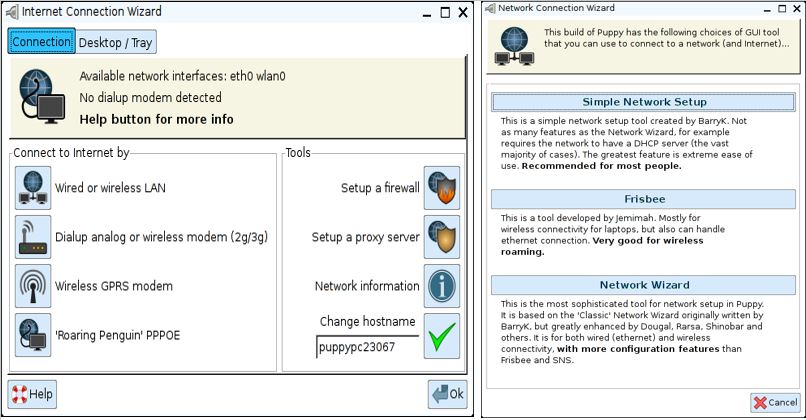 This part is a little tricky one, in the case of Internet configuration, I would say configuring Internet in Windows is much easier as the initial setup of the internet Puppy Linux is a little bit hit and miss. But that does not mean it does not work properly or you cannot do it on your own.

Though to fake the fuss a little easier the manufacturers have come up with some tools for setting up the internet connection, but the problem is those tools are sensitive to the version of the OS, so you may have to try all of them blindly to find out the right one for you. From my experience, it is a case of trial and error and again trying to find out what’s going to work, for each of the particular releases of Puppy Linux, so using the default option is always preferable from my point of view.

While setting WLAN, which is going to be case with most of the users, you have to go to Puppy Network Wizard > wlan0 > wireless > scan for the router (network) > save it > select security feature (for most it is WPA2) > put the network password > save it > go to Static IP > give the appropriate inputs > then try Auto DHCP > if the result  is unsuccessful try multiple time and the network connection will be there eventually.

The Simple Network Setup is the easiest way to get connected, but it uses preset settings for connection optimization, which may incur the network performance, whereas the Network Wizard is the most complex but it offers many more complete tools for adjusting the perfect user-defined settings. Though you do not have to go through the process again and again unless you want to use any other network.

Flash does not come pre-installed by default but can be installed by clicking on the Quickpet icon from the desktop.

A window will appear with the choices of many available versions of Flash. Go for the latest or the most stable one. Playing MP3s is not a big deal, you do not have to do anything for that, the codecs come pre-installed, so without any worry play your favourite music. If you want any other media player app, then you can check the repositories for more available options.

Puppy Tahr offers a lot of apps pre-installed by default but most of them are very lightweight in nature, which means it may lack some advanced options and functions but does most of the jobs and also the performance is exceptional.

Installing Apps from the Repositories

There are mainly two ways to install apps in Puppy Linux.

Quickpet application is the easiest way to install apps. It will automatically search the database and repositories to suit the best apps for the need. The Quickpet application provides a tabbed display split into categories, which are listed Browsers, Graphics, Drivers, Desktops, Internet, Games, Audio & Video, Office and Other. 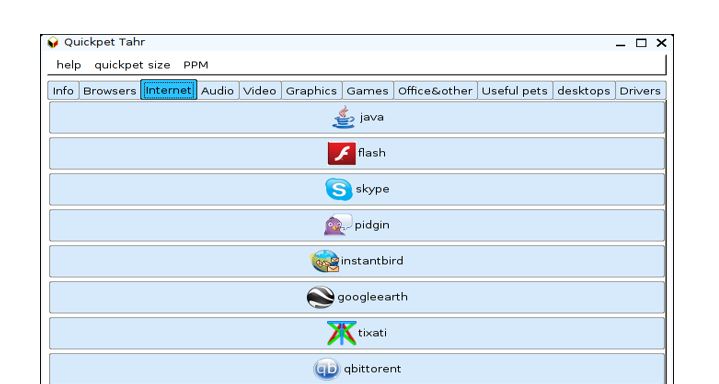 Official SFS also can be downloaded from Menu > Setup > SFS manager download and install SFS file. This kind of SFS file may contain PETs like LibreOffice within it. Downloading the official SFS file is completely safe and hassle-free.

The Puppy Package Manager is a fairly standard application for all the Puppy products. Not with too many options but with simplicity and neatly kept file this app lets you visit the repositories very easily.

You will find a list of repositories to choose from within this application.

In the centre, you will find the list of categories from there Selecting any category changes the list of applications within the right-side pane.

You can install any application from there, as well as you can remove any installed application using the same package manager application. Installing app in Linux is much easier as compared to Windows OS. After just a simple click on the install button, the system configures and install the app automatically. Though any advanced user may feel that it is a lack of freedom while using the OS, for standard jobs, the app installation procedure of LINUX is just fine.

By now you have got the point that instead of the small size Puppy Linux provides lots of tools for customizing the desktop. Options including the wallpaper changer, theme changer, theme maker, icon changer, etc. there are many more to explore.

In short, it is a small packet big bang, or you should say one of the best deals around the world where you are paying nothing for almost all the need satisfactory items you are getting.

Personally, I steel wonder, that in that such small package and for free, how it can be that much powerful. If it is true (while it is actually) then why Apple Macintosh or MS Windows OS are so big in terms of size and so high in terms of money.

The later editions of Puppy Linux which are Slacko Puppy Linux 6.3.2 and Xenialpup Linux 7.5 are almost the same but come with more functionality and optimum performance. Setting up, configuring, browsing through the desktop is almost the same as Tahr Puppy. Then also if you are looking for a more detailed review on those or some tutorial then look for other articles on this topic on our website.

Other Useful Resources to Read:

How to fix grub rescue in Windows 10 and Ubuntu dual boot: Bootloader error

What are Puppy Linux requirements for PC to install