Do you want to run an Android app on Linux operating systems such as Ubuntu running on a PC or laptop? Then Anbox could be an option. Well, Google has millions of apps, however, when it comes to run them on PC, Windows has quite a good number of applications such as Bluestack, NoxPlayer, and more. But what about Linux users, none of these emulators are available for Linux, thus, in such a scenario “Anbox” (Android in a box) is trying to close that gap. It allows Android apps to run under Linux as if they were normal desktop apps.

On the Page hide
What is Anbox? Is it an emulator like Qemu?
Anbox installation on Ubuntu 20.04 LTS for running Android Apps
Open Command terminal and run the update command
Run command to install Anbox on Ubuntu 20.04 Linux
Install Anbox using SNAP- Recommend a method
Launch or Run Anbox on Linux
Install Google ADB Tool
How to install Google Play Store on Anbox
Install Android Apps on Anbox

What is Anbox? Is it an emulator like Qemu?

Anbox is an open-source application that creates a secure and tight container for the Android operating system to run without any direct access to host computer hardware. All hardware access takes place via the Anbox daemon, which runs in the background, provides all necessary services, and organizes hardware access. It provides a compatibility layer and uses the Linux distribution system’s kernel to provide a virtualized environment instead of software emulation like Qemu and other emulator tools Genimobile or Shashlik do and typically have disadvantages in terms of speed due to the emulation. If you have ever used Docker then you already familiar with the isolated container and images of the different operating systems running on it.

On the Anbox the network can be used, but not GPS or camera, etc. However, the sound output can be used by some apps, yet, by far not all apps can be used. Therefore, a complete Android system can be operated on a Linux PC in a container. Anbox uses the defined Linux namespaces (identifiers for resources such as ipc, mount, net, pid, user, uts) to run Android applications on every GNU / Linux-based platform.

Note: Although we successfully performed this guide on our system, there no guarantee that Apps will work after the installation.

The best thing to install Anbox on Ubuntu 20.04 LTS, 19.04/18.04 LTS, we don’t need to add any third-party repository or the PPA repo; as the packages, we need to configure Anbox are already available on the official source list of Ubuntu, thus either using the APT package Manager or SNAP, we set this up on our Linux PC or Laptop.

The first thing, although it is not compulsory, however, I recommend running once the update command before moving further. For that simply use:

This will ensure all the packages on the system are in their latest state.

If you are on your Ubuntu, Linux Mint, Elementary OS, MXLinux or Debian simply run the APT command to get the packages of this Android application runner -Anbox for your Linux system. However, we recommend the SNAP method because installing with APT you may find one problem that the Anbox will automaticity get closed after starting.

If you already used the above method and everything is working fine then skip this one, however, those are on Ubuntu or any other Linux distros such as CentOS, Fedora, RHEL, they can also use the SNAP package manager, as it supports cross platforms.

If you don’t have a snap on your system then see this tutorial: Snap install on Linux.

Launch or Run Anbox on Linux 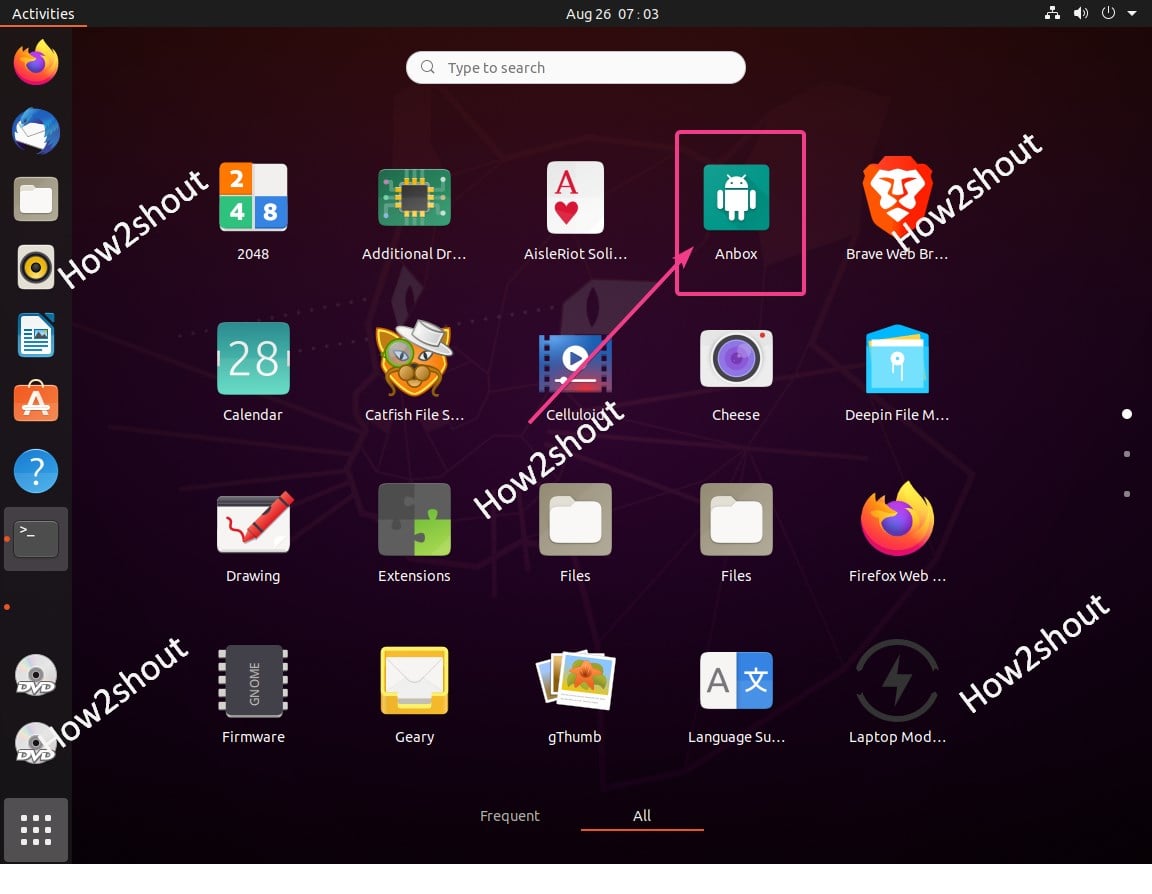 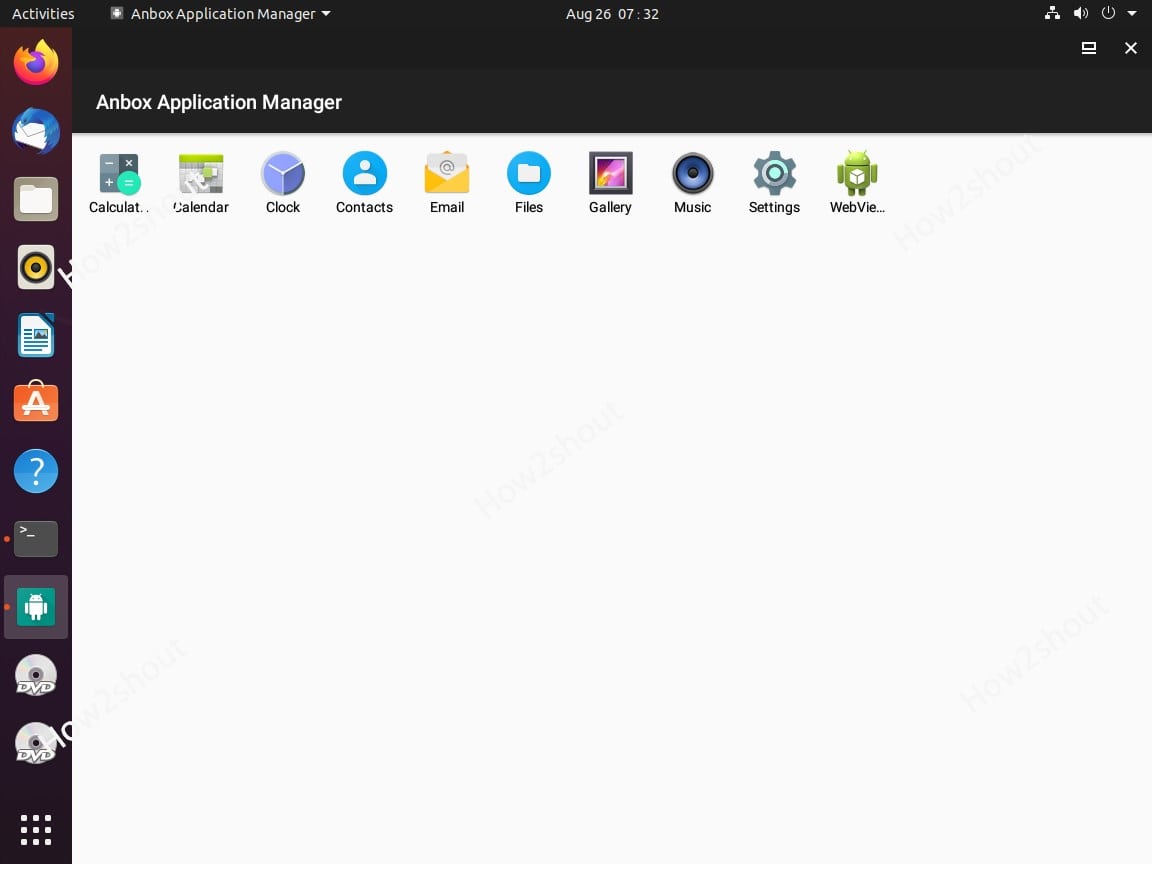 Anbox alone cannot be used to install Android apps as there is no Google Play availability with in the software. Thus, to install any third-party APK file, we need to configure the Android Debug Bridge (ADB). This will help us to manually install and push Android apps to Anbox.

How to install Google Play Store on Anbox

Now, this is something I got after quite a research and multiple time hit & try to install somehow the Google Play store on Anbox Android OS container.

Well, as I won’t be able to use ARM-based apps on Anbox because it doesn’t support that and when I tried it through an error:

Hence, there is a German developer who has created a script available on GitHub to install Play Store and libhuodini library for ARM support.

You can check that using the Github given above, however, here I am using it script to install the Google Play store on Anbox:

In case after installing the Play Store on Anbox you won’t be able to connect internet for setting up Google account to install various Android apps use the command:

Once you are done with all this, open the Anbox and the command terminal as well. If you want to install APK manually using the Terminal type the following commands:

To find the attached emulator devices run the below command, this recognizes the running Anbox.

Download the APK file of the app you want to install from various online websites such as APK mirror and all. After that use that APK with the ADB installs command syntax:

Like we have installed here Leammings Puzzle APK as shown in the screenshot. 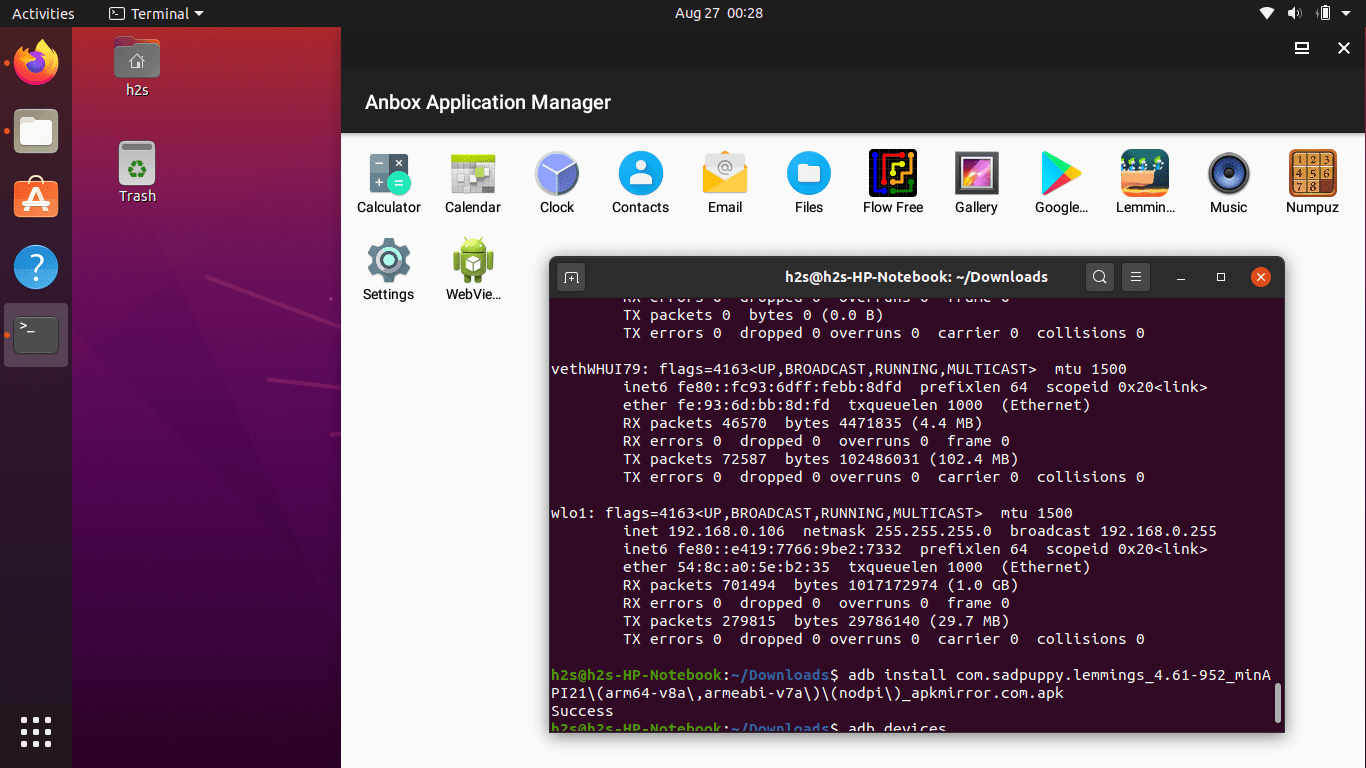 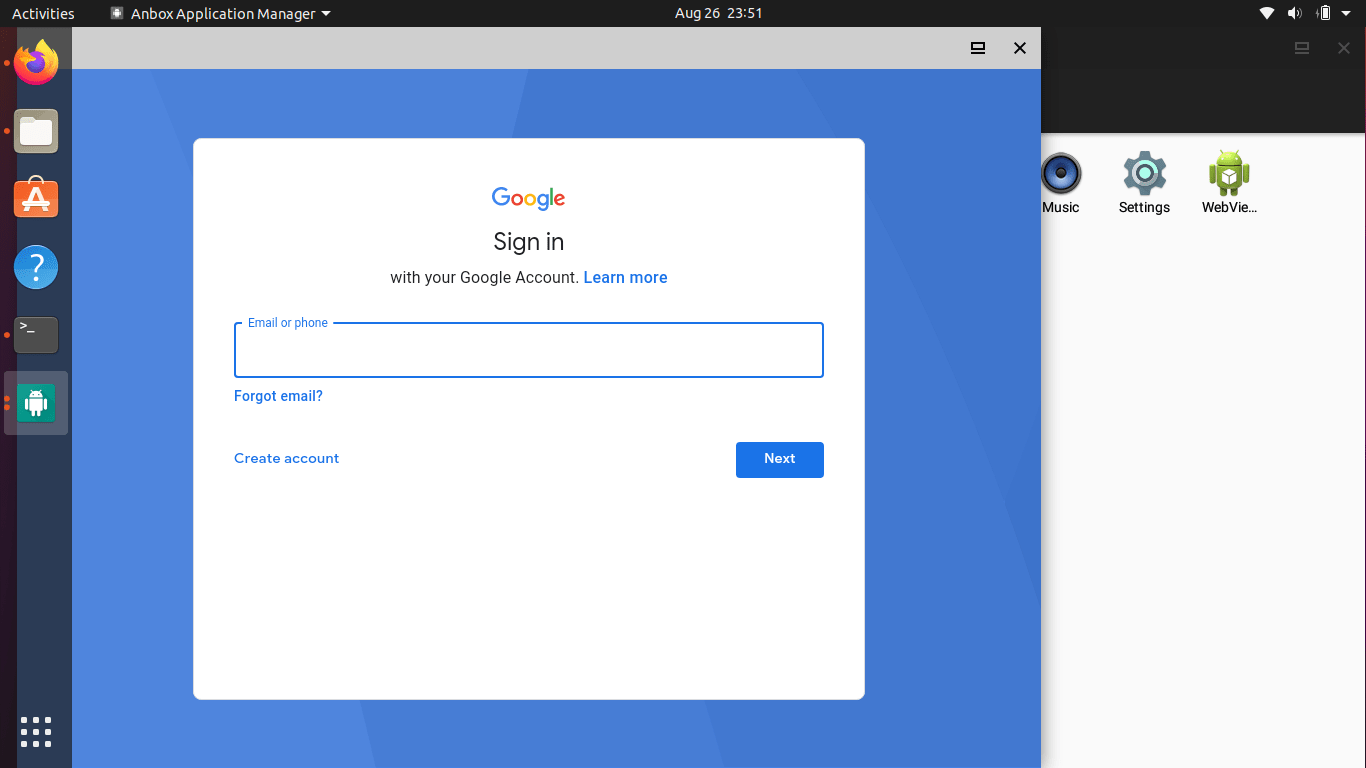 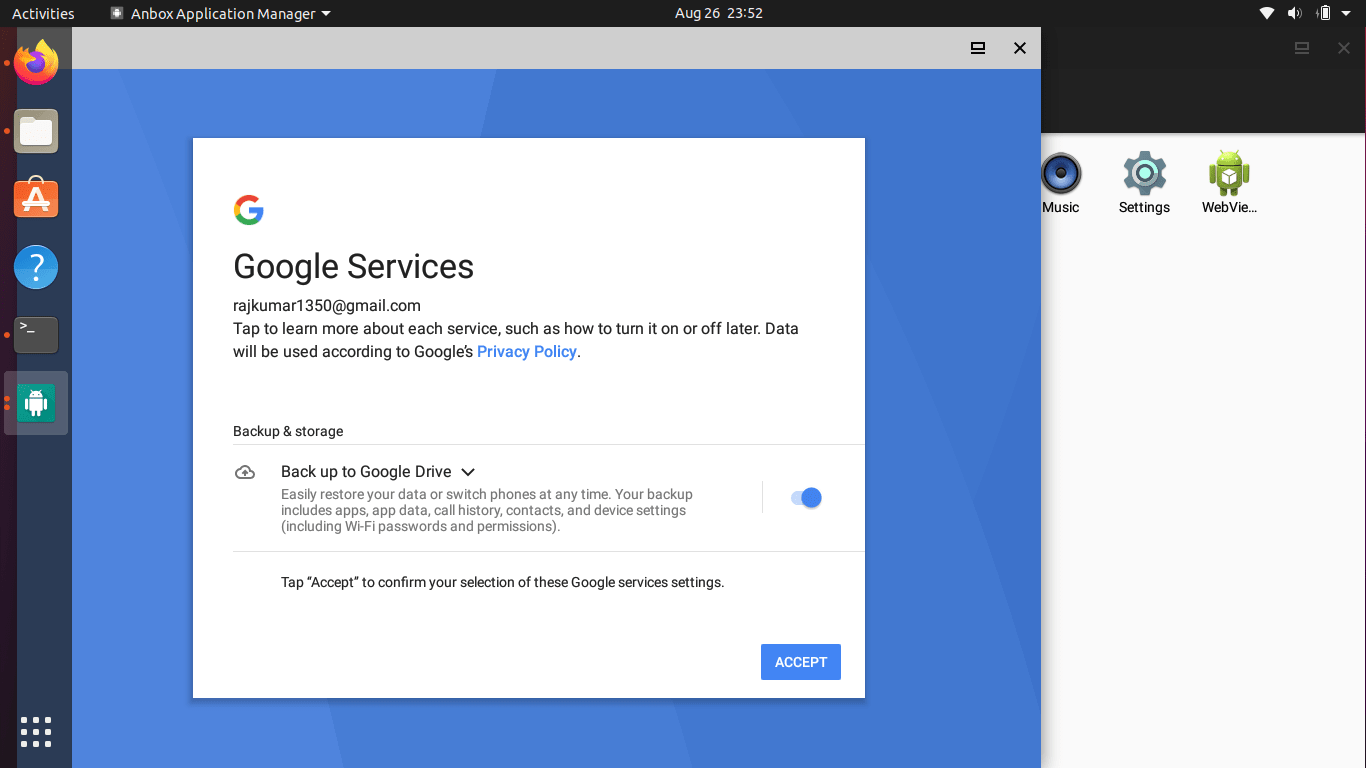 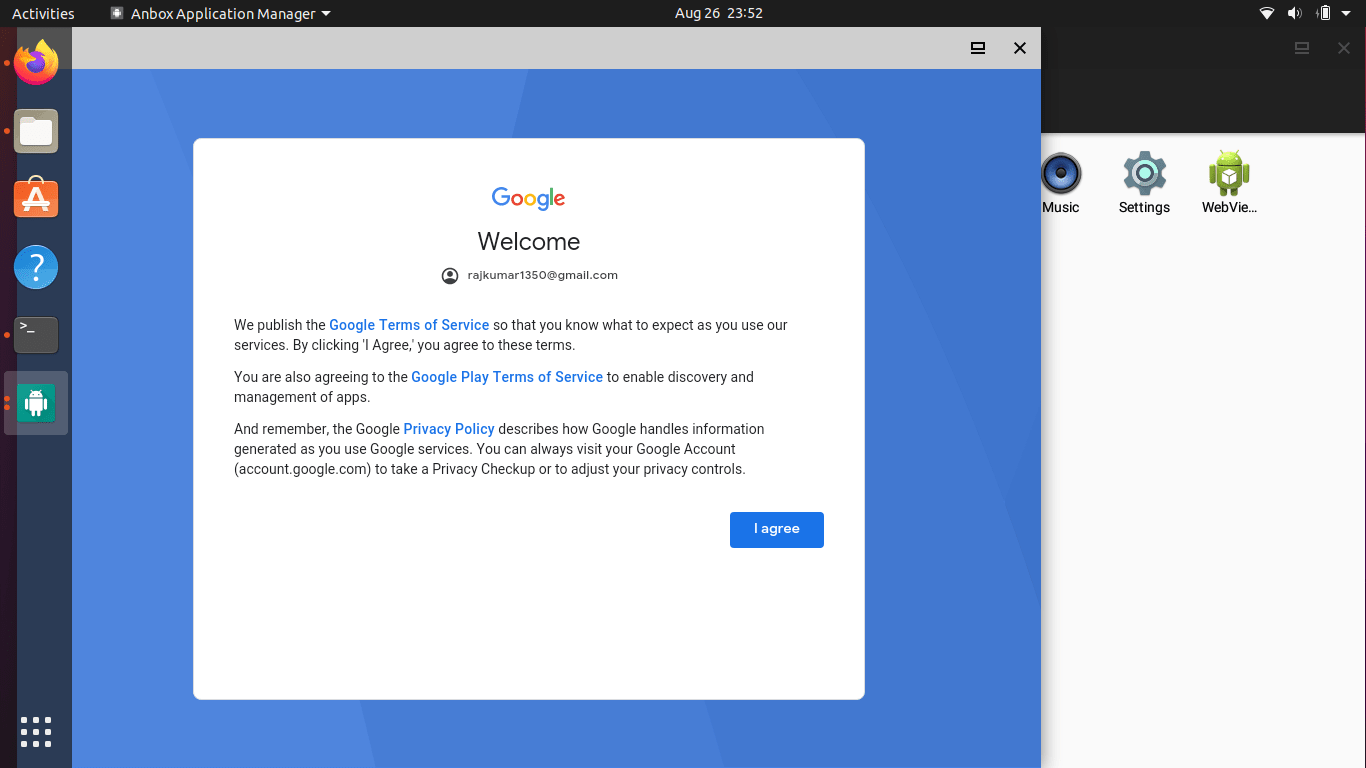 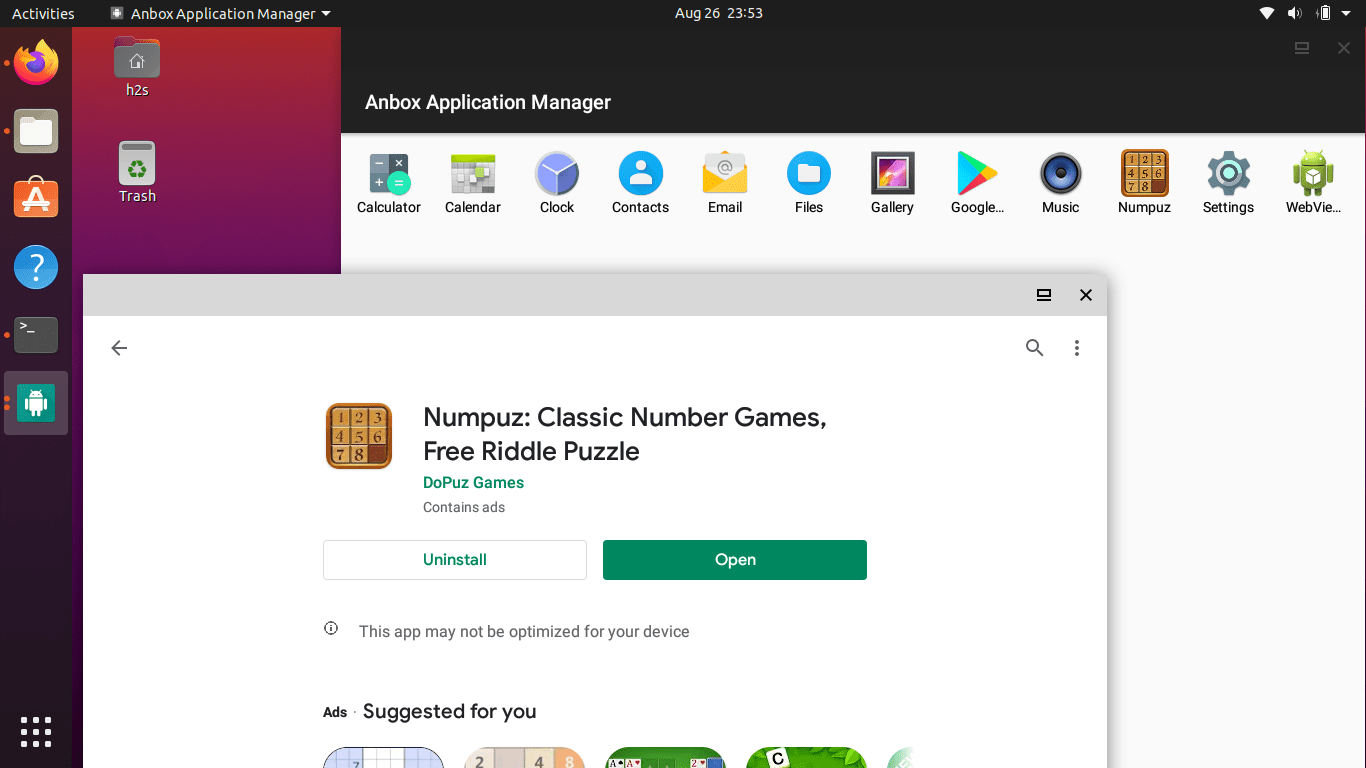 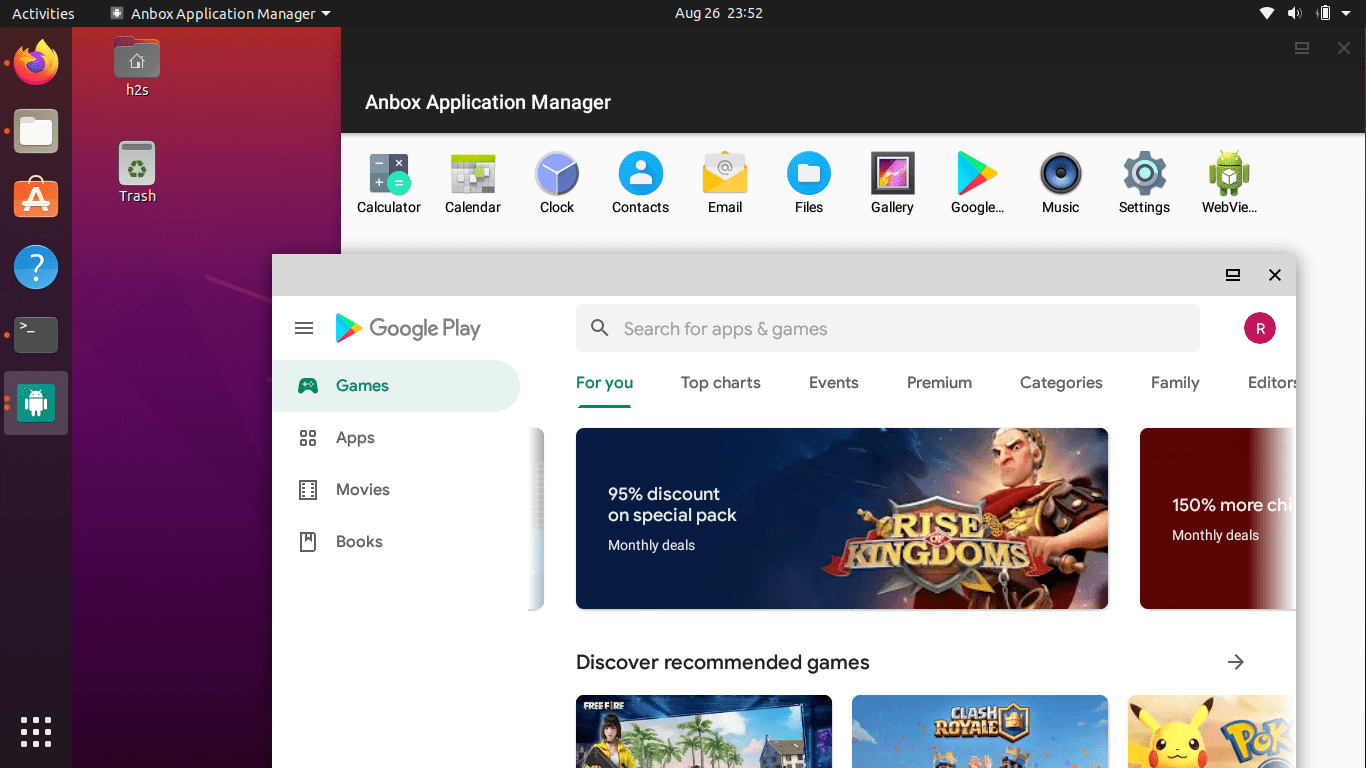 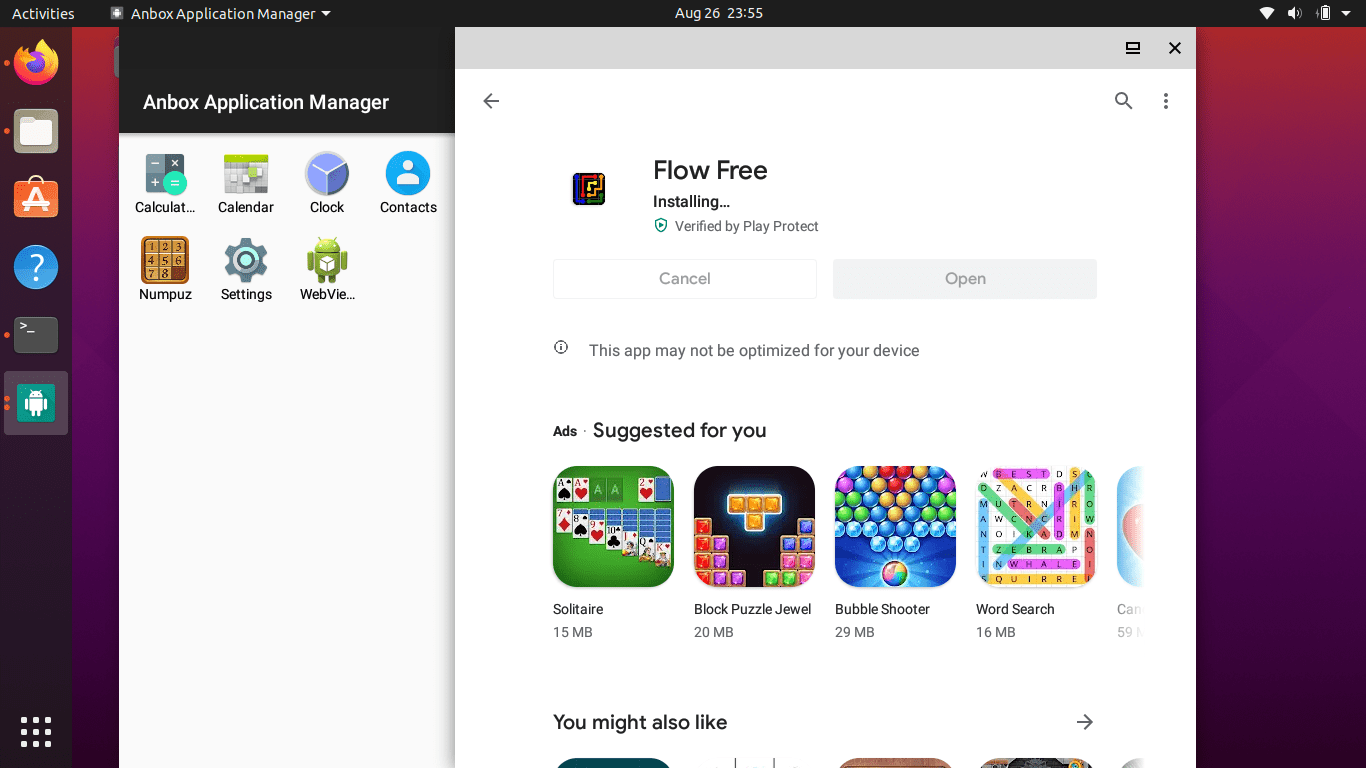 6 thoughts on “How to install Anbox on Ubuntu 20.04 LTS focal fossa”