Learn the commands to convert Almalinux into Rocky Linux server or desktop using the terminal with the help of an official script.

With the announcement of RedHat that it is dropping the long-term support in CentOS 8, other developers came with their own similar Linux distro- Almalinux & Rocky Linux 8 are one of those. Well, both Almalinux & Rocky are based on RedHat Enterprise Linux with one-to-one binary compatibility.

Although it is not necessary to move from Almalinux to Rocky because both are the same, except the developers behind them. Both are community enterprise Linux distributions and downstream to RHEL. Nevertheless, still due to any reason you want to switch from AlmaLinux to Rocky, the official developers of “Alma” provide a script that automates the migration process smoothly.

However, before following this tutorial we recommend snapshot or backing up your system data to ensure safety, in case something goes wrong.

Steps to Switch from AlmaLinux to Rocky Linux 8

Before moving to the next step, let’s first ensure that our current Almalinux is up to date and has the latest version. This will help to mitigate any compatibility issues.

After updating reboot it once:

As we discussed at the beginning of the article we don’t need to mess with things manually. The migration script made available publicly by Rocky Linux developers can be used to easily start the switching process.

Install cURL, if you don’t have already:

By default the script doesn’t have the permission to execute on the Almalinux, hence first we have to change that using the given command:

Once the previous step is done, run the script under your root user rights to start the Alamlinux to Rocky Linux converting process.

To see what are the options available for the script, use:

Whereas to start the Almalinux to Rocky Linux Converting process, run: 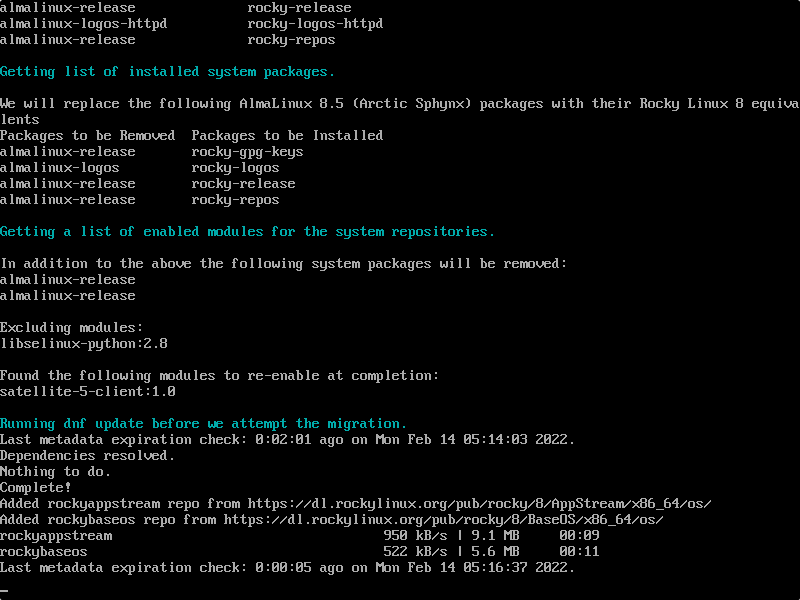 Once the conversion setup is completed, first reboot the system and then check what version of the Linux you have now on your system.

That’s it… In this way, we can easily convert and migrate from Almalinux to Rocky Linux 8 with a command terminal. Well, I hope after switching everything is alright on your system.

How to migrate from CentOS 8 Linux to AlmaLinux 8
Migrate From CentOS 8 to Rocky Linux 8
How to Migrate CentOS Linux 6, 7, 8 servers to Oracle Linux