What is Sensu Go?

Sensu is an open-source agent-based monitoring tool well-suited for cloud environments. It is written in Ruby and uses RabbitMQ for messaging and Redis for data storage. Whereas Sensu Go is developed by completely rewriting the original one but in Go language to offer new capabilities and reduced operational overhead.

Sensu Go is a free and paid observability platform that supports server performance metrics and makes it possible to close gaps in the monitoring of correlations between metrics, logging, and tracing. Existing surveillance technologies such as Nagios, StatsD, Telegraf, Prometheus, and others can be seamlessly integrated into Sensu.

It is light in weight and comes with a scalable monitoring framework that can be used for multiple servers such as network devices such as routers and switches. One of the most important features of Sensu Go is the support of monitoring as code. Monitoring workflows can be defined using declarative configuration files that can be shared with team members.

Sensu supports multiple clouds and their associated infrastructure and is one of the best solutions when a company adheres to GitOps principles and treats everything as code.

There are three editions of Sensu GO- Free, Pro and Enterprise. The free one offers to monitor up to 100 nodes free of cost whereas for more the user can go for the Pro package available with a price of $3 a month per node and the ability to support max 3000 nodes; suitable for SMBs. If you need more than that Enterprise edition is there at the rate of $5 per additional node and with other commercial features.

Sensu Go’s components consist- of the Sensu backend, and the server component whereas the Sensu agent is installed on the systems to be monitored. These can be, for example, servers, virtual machines, or containers. From there, the agent initially logs on to the backends, which are stored in its configuration file, and sends keep-alive messages from this point regularly (“Don’t worry, I’m still alive!”). The system with the agent part performs all monitoring checks for which it is responsible.  Apart from these two, it also offers Sensuctl, a command-line utility to manage Sensu Go using Sensu’s HTTP API.

To start with this monitoring tool initially, your system should have 10 GB of free space and 4GB of RAM. However, if you are in production then 8GB of RAM is recommended.

Your system might be already up to date, yet, before following this tutorial let’s run the system update command on Ubuntu 22.04 or 20.04 once.

The next step is to have the repository that will supply the packages we need to install the Sensu backend on our Ubuntu system because it is not available to install using the default system repository. Hence, in your command terminal run the given commands.

We already have the Sesnu repository on our Ubuntu 22.04/20.04 system, now we can easily install the backend using the APT package manager of the system. Here is the command to follow:

We require a backed configuration file to start the Sensu Go service, without it you will have an error if you try to start the service. Hence, first, download it using the given command:

Now, start and enable the service:

To check the service status, use:

Once you are sure that the Sensu Go backend is running without any error. Set the username and password to access the Web-based graphical user interface of this monitoring tool. For that, we need to set two environment variables with the required credential values to set the Administrator user and password. After setting environment variables initialize it using sensu-backend init command.

Alternatively, the users can use the interactive way to set the username and password using the given command instead of the above:

The system will ask you to set the username and password along with the API. However, the API key is optional — press Enter key to skip it.

Open a local or remote system browser that can access the IP address of the server where you have installed the Sensu GO monitoring solution.

However, make sure the port number 3000 is opened in your server’s firewall to access other systems.

Point your browser to the server IP with the port number in the following format:

Use the Administrator credentials set for Sensu in Step 5 in this tutorial. After that click on the Sign in button. 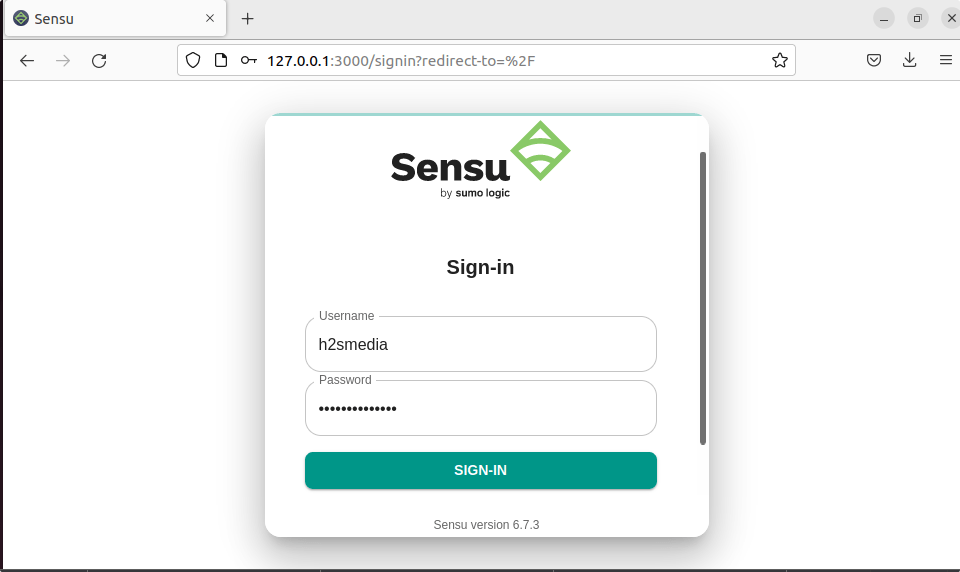 Finally, the Sensu Go’s Dashboard is there from where you can get the overview of metrics fetched from the systems set to monitor using the Sensu Agent. But for that, we have to manually install the agent on each system that we want to monitor. Go to the next step for that. 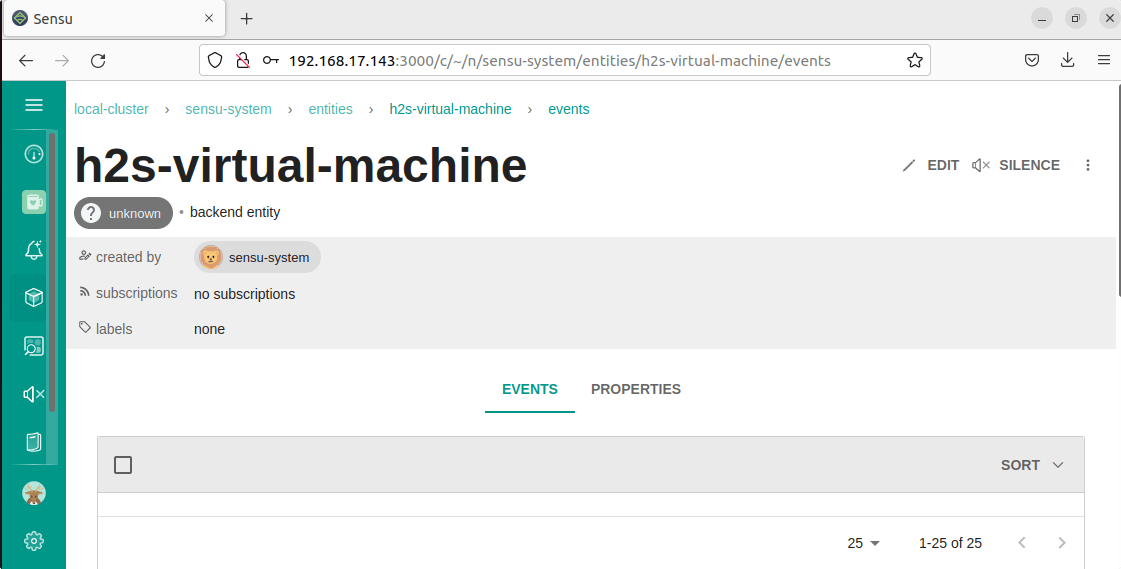 Now, let’s say you want to monitor some remote system using Sensu GO, for that first we have to ensure that particular system has Sensu Agent.

For Ubuntu or Debian

10. How to configure Agent for Linux

Let’s say you have to install Sensu Go Agent on Linux such as Ubuntu/Debian or RedHat using the previous step. Now, you want to configure it so that the Backend can identify the system and add it for monitoring.

Here we are using Debian but the method will be the same for other Linux systems as well.

Remove the # from the name, namespace, backend-URL, and IP address as shown in the given screenshot. After that replace the address 127.0.0.1 with your Sensu Go’s Backend server. 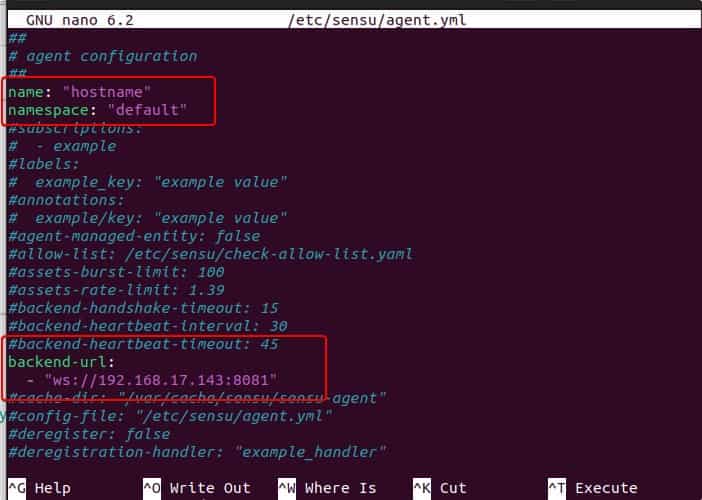 Save the file by using the Ctrl+O, hit the Enter key, and then exit – Ctrl+X.

Now, restart the Agent to make the changes into effect.

After installing and configuring the Sensu Go Agent on the system that you want to monitor, refresh the Sensu Go web interface running on Ubuntu 22.04 or 20.04 server, to see the added device on your Dashboard. 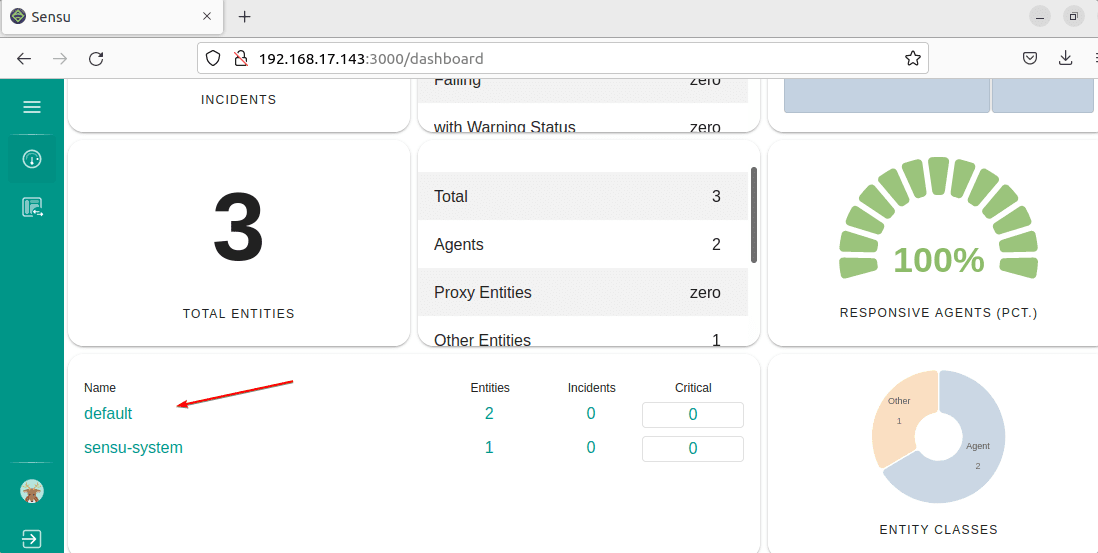 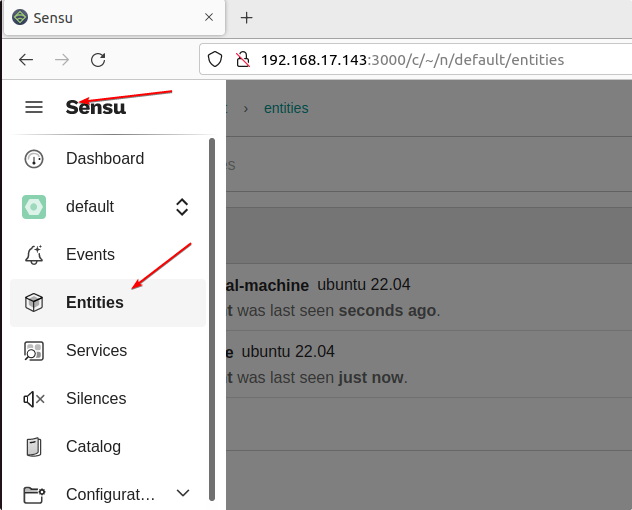 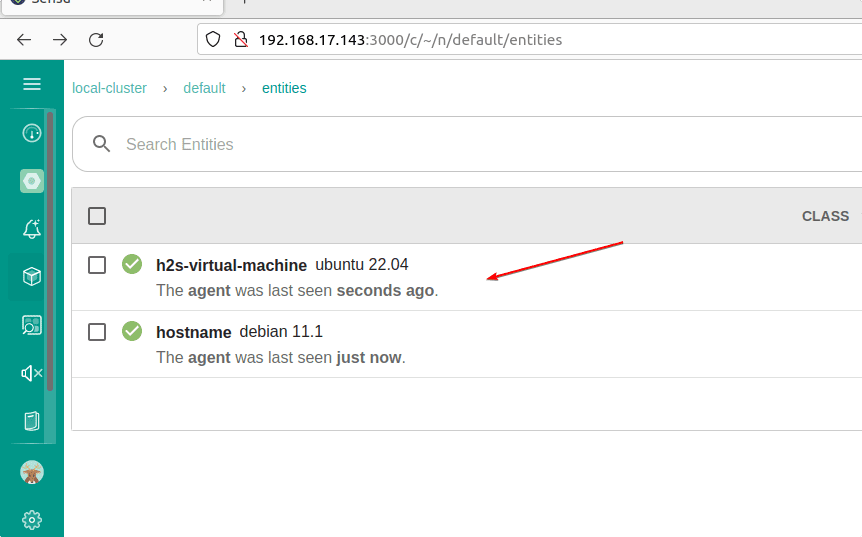 12. How to install the Sensuctl command tool

Sensuctl is a tool offered by the Sensu monitoring solution for managing its resources using the command line. It works by calling Sensu’s underlying API to create, read, update, and delete events, entities, and resources. Sensuctl is available for Linux, macOS, and Windows.

Here is the way to install it on Debian or Ubuntu systems.

Know more about this command utility and its usage on the official doc page.