MariaDB, a fork of open source MySQL can be easily installed on a Docker container to create Database for various web applications such as WordPress, OwnCoud, etc. The benefit of using MariaDB on Docker container is you will not need a dedicated server to separate your Database server from the rest of the applications.

However, learning curves will be there to manage containers. And here we will help you understand the basic steps to install the MariaDB container and how to run and access it remotely to manage databases.

The first thing that must be on your Windows or Linux server is the Docker. Although if you are here then you would already have it, if not then see the below-given links:

To set up containers, we need the Image of the particular application that we want to install in that. You can create a Docker app image by yourself, however, luckily the developers of Docker also provide a repository of images called Docker Hub. From where we can easily pull the latest images of hundreds of applications to instantly create and start with containers. And MariaDB is also present in the Hub. Here is the Hub Page featuring MariaDB.

Note: In case you want to install some previous version, then see the link given for its Hub page above and use the available tags. 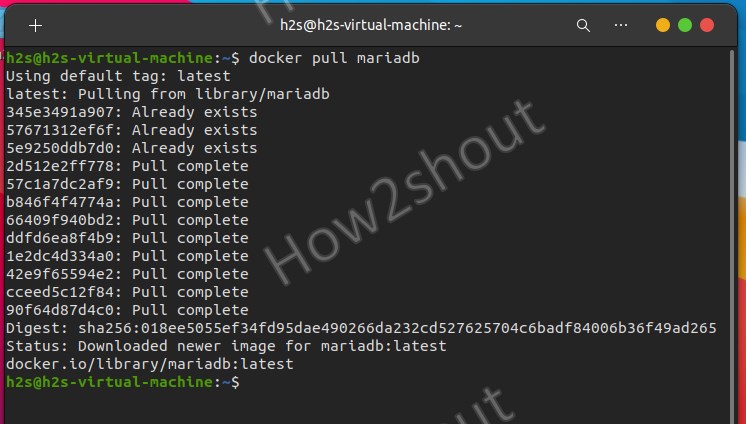 Now, there are multiple things we can perform while starting the installed MariaDB container. Here are different scenarios and commands corresponding to them.

You want to run MariaDB that can be accessed only by the host and other containers. Then, run:

Note: Change the bold items in the above command as per your choice.

Flags used in the above command:

--name mariadbh2s – To set the name of the container otherwise it will get assigned one randomly.

-d is to run the container in the background.

You want to run the MariaDB container and also want to access the Database server from remote computers. Then map container’s MySQL port 3306 to host port 3306 port.

For this we have to add a syntax or flag:  -p host-port:conainer-port

Trivia– We can also assign some host ports dynamically to the container, in case the default port of MariaDB is occupied on the host.

For that, the syntax will be like this: -p <container-port> or -p 3306. However, when you assign a dynamic port, to find out which port has been assigned and run-

In the result, you will get the active container details including the ports that have been mapped with the host.

As we know Database is an important thing for any application and in such a scenario if your container gets deleted, all the data will be gone. Thus, it will a good idea if we create a mirror copy of Docker MariaDB Volume on the host filesystem. As you add anything to the MariaDB Docker container database server’s internal volume this will also get copied to the mapped host directory. In this way, we always have a backup copy of all our container data.

Let’s create a directory, say /opt/mariadb/backup on the host to map it with the docker container of mariadb.

On the host system terminal type-

-p stands for parent directory – means it will hold other files.

Now, coming to the main command. The default volume or directory where all the data of mariadb container stores is – /var/lib/mysql on docker. Thus, to map it with the one we have created, use the following command syntax with the -v flag.

Hence, if you go with the one we have created then the above syntax will be like this –

And in the docker command-

So, in the above commands, we have not only learned how to forward the port but also have mapped the volume that will remain on the host even after destroying the container.

If you want to check the installed MariaDB container version without switching to its bash. Then here is the syntax-

Note: Replace the container-name with the one you have set.

Here, in our case the container name is mariadbh2s, thus the above command will be like this-

Note: Use your assigned container name in the above command.

Although once you are in container’s bash using the above command, you can  access the database server by simply typing mysql -p

However, if you don’t want to switch every time to its container root shell, then it is possible to directly access MariaDB from the host terminal. For that install MySQL client on Host.

For example, if your host is on Debian or Ubuntu-

Whereas, RHEL based systems can use-

Now, find out the IP address of Mariabd running container-

Note– Replace the Container-name with the one you have assigned.

Connect to the Ip-address you have got to log in to your MariaDB container.

If you get some error then use force flag-

Well, if you are using Kitematic or any other Focker GUI then the above command can be easier to handle. –

1 thought on “Commands to Install & Run Mariadb on Docker Container”